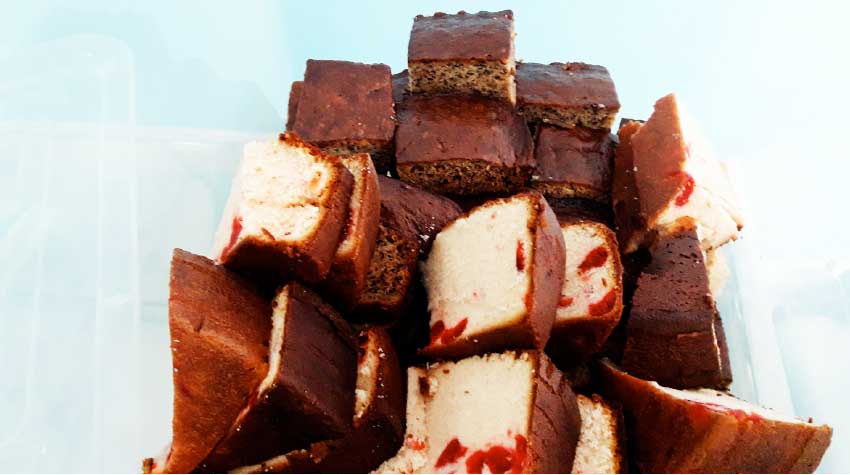 Sometimes in life, in order for things to come through or to work out, we just need to catch a break. It doesn’t matter how hard we work, or how much we apply ourselves to our given task, without that break, we would be set for failure instead of success.

Kevin Morris can attest to this; although in his case, his road to success may be more attributable to destiny, rather than to simply catching a break or getting lucky.

You see, Kevin Morris very recently started his own business, the Morris Café on Mary Ann Street just opposite Nato’s Book Store. However, his dream nearly went up in flames almost as soon as it got off the ground.

I met Kevin about a month ago at Serenity Park. He was carrying around his plastic container filled with cakes, selling them to potential customers, trying to ‘build his clientele’, as he would say.

After hearing his backstory and the journey he took to get to St. Lucia and eventually open up his own business, I decided to write a story about him.

But that was before the Mary Ann Street Fire.

As everyone knows by now, two weeks ago a fire burnt down several buildings located on Mary Ann Street and as can be seen in the photo, it was one building away from burning Etienne’s Jewelry Store, where Kevin Morris’ Café is located.

He spotted me in town, the very day of the fire (talk about destiny), and I interviewed him later that week, at Morris Café, right next to where the fire was doused; a reminder of just how fortunate he was, to still have a business.

“I’m originally from America.” Kevin told me. “I was born in Brooklyn New York. I was raised in upstate New York and growing up I had experience coming to the West Indies.”

Kevin’s parents were expats from the Caribbean who had moved to the States and so growing up, he always had a great appreciation of the Caribbean, particularly the West Indies.

“As a child I would travel to Trinidad on vacation, and St. Vincent and St. Lucia. So I grew up coming to the West Indies.” Morris recalled.

He continued: “My parents are of West Indian descent and I always love the West Indies. I love the laid back atmosphere and the people. This was always intriguing to me.”

Calling St. Lucia “one of my favourite islands”, Morris would go on to describe it as “a beautiful island” that “has a lot to offer.”

In fact, this was one of the things that inspired Kevin to start a business.

After stating that “I want to do something for myself, make a living for myself” and describing his mother as “a really good baker”; Morris figured that he could “create something, open something ,in order to sell her cakes, or provide [them] to the people of St. Lucia.” He made sure to add that: “I think it would be a good thing because her cakes are really good.”

It is this winning combination of his mother’s prowess as a baker, and his own determination to go out onto the streets to build his customer base, that has seen early success for Morris Café.

And as each one of Morris’ customers knows, he doesn’t just sell the cakes, but as part of his strategy to build his base, he provides free samples; so confident is he, in his mother’s prowess as a baker.

I can attest to this myself, as Morris also offered me a sample cake on the day we met. He didn’t know at the time that I only eat one type of cake, but after some wise words from his mother, he’s decided to add this to his menu in due course.

“Presently what we offer is banana bread, carrot cake and cherry cake.” Morris told me. However, he promised that “soon we plan on offering local juice and punches such as lime juice, Mauby, peanut punch and banana punch”; adding that “we’re willing to hear what people like and we will include that into the menu as well.”

For now, Morris goes around various areas in the City Centre selling his cakes, but he also went through the trouble of becoming a registered business owner, which to him was no trouble at all.

“I got all the necessary documents because I wanted–when I first came into this–I wanted to make sure that my business was legit, that it was an official business, so that people would take me serious.”

He also added that those licences didn’t take very long to acquire and that it was a worthwhile step in order to be recognised as a legit business owner.

Morris told me that he is very grateful to God that his newly-minted business was spared from the fire and he is also grateful for the help of his parents and patrons for being an inspiration to him and his business.

Kevin would go on to reflect on what the fire almost cost him and his loved ones. “Mr. Etienne’s Jewelry Store wasn’t affected and the business that I just recently opened–about three weeks [ago]–could have been destroyed and it could have been burnt to the ground. But I also used that in a positive way too; in a way that makes me want to appreciate what I have and to work harder to establish myself and to do what I set out to do. It gives me more motivation to really be a staple in the community and be able to reach out to the community.”

Although his biological mother is still alive, his father has passed. This did not preclude Morris from being grateful to all of his parents though.

“I just want to take the opportunity to thank my parents; Errol Leroy Morris and Olga Libert [who’s also deceased] for raising me and for always being there for me and having my back and for giving me encouragement and always making me feel like I can accomplish anything I set my mind to.”

He also thanked his biological mother, Mary Morris for helping him “make these cakes and for the dedication in helping me make a living for myself.”

Morris also mentioned Mr. Andrew Etienne, the owner of Etienne’s Jewelry store whom he described as “a very kind and genuine human being” who’s “ been very supportive about the whole process”; also thanking him for “giving me the opportunity to start this.”

Given Kevin Morris’ work ethic and determination, as well as his recent stroke of good fortune, it seems Morris Café is destined for big things in the future, and may just be remembered as the Miracle on Mary Ann Street.