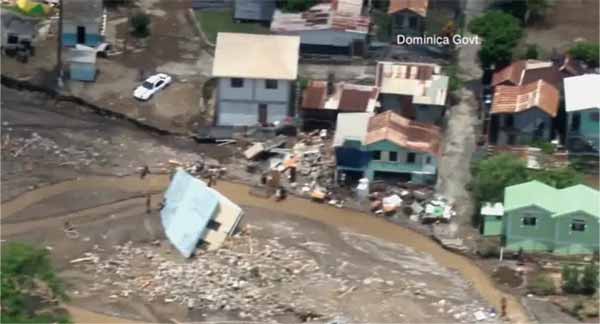 PRESS RELEASE – The European Union is releasing to Dominica EC$24 million (7.7M euros), the first tranche of a total of EC$34 million (11M euros), as part of its contribution to the reconstruction of the country following the devastation caused by Hurricane Maria last year (2017).

With this grant the EU will support the construction of two emergency shelters in the Castle Bruce and Jimmit areas and the rehabilitation of 1000 houses in various affected communities. The reconstruction will be carried out exclusively according to the Building Back Better approach and to the highest resilience standards.

In addition, the grant will also support the Government in its revision of sector policies to include climate change adaptation practices and to reduce disaster risks while facing extreme weather events, in line with Dominica’s new National Resilient Development Strategy.

Prime Minister Roosevelt Skerrit said: “This contribution from the European Union will assist us with the ongoing rehabilitation of communities throughout Dominica as we seek to reconstruct in a Climate Resilient way. It will also ensure that the more vulnerable of the population are catered to as the process of rebuilding their lives is painstakingly undertaken from day to day.”

This is the second post disaster reconstruction grant Dominica will receive from the EU in three years, in addition to ECHO Humanitarian aid, following the EC$28 million (8.9M euros) provided for the rehabilitation of the water and energy infrastructure after Tropical Storm Erika in 2015.

This funding comes in addition to the bilateral cooperation between the European Union and the Commonwealth of Dominica, which supports two key sectors of the Dominica economy, namely agriculture and renewable energy. Under renewable energy the country has been allocated EC$8.3 million, while the agriculture sector has been benefiting from the EC$48 million (15.27M euro) Banana Accompanying Measures programme.

“Dominica has been under hard trial during the last few years, but it is encouraging to see the mobilisation and the commitment of all Dominicans to rebuild the country as a truly resilient nation. As a European citizen I am proud that we stand together with the Dominican people and other members of the international community in this important endeavour”, said Ambassador Daniela Tramacere.