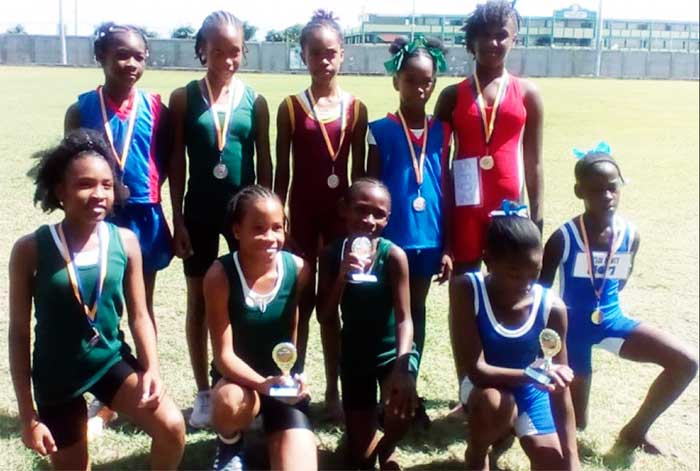 There were no doubts in the minds of their Physical Education Teachers and classmates of the Augier Combined and Blanchand Combined Schools as defending champion 11 year old Chester Bryan (male) and 9 year old Noeline Fredrick (female) graced the starting line when they faced the starter on Wednesday morning outside the dilapidated George Odlum Stadium, now St. Jude Hospital in the 2018 District 6 Road Race.

For Chester who is currently in Grade  6, it was a repeat of last year’s performance this time competiting in the Under -13 boys’ category, he gave nothing to chance along the Vieux Fort Highway/Sandy Beach Waterfront and the concrete strip to finish ahead of 184 other participants at the Phillip Marcellin Grounds.

Unfortunately, there was no time given, and so it remain unclear whether the future long distance runner from the south of the island bettered last year’s performance, but one thing for certain is that he collected crucial points for his school being the first boy across the finish line.

For Chester, all eyes will be glued on him when it comes to the grand finals of the Inter Primary school Road Race; last year he finished 1st in his division and second overall.

In the girls’ category, 9 year old Noeline Frederick of Blanchand Combined, who finish 11th last year, made light work of the field to win ahead of second place Leanna Edward of Vieux Fort Primary and her school mate Hope Jn Marie who finished third.

By all indications, Frederick will be in the thick of things competing with her peers whenever the grand finals of the Inter Primary School Road Race takes place and based on her electrifying performance, she is certainly one to look forward to.

The VOICE spoke to the Principal of the Blanchard Combined School Esworth Prescott about his students overall victory and this is what he had to say.

“We feel great at Blanchard Combined School, we have reasons to celebrate; in 2017 the BCS finished second and our goal this year was to finish first. The past few weeks leading to the event the students put in quite a bit of hard work and the result speaks volume on the day”.

He continued, “The BCS is striving to make an impact in all sporting disciplines this year. We intend to win the District 6 Table Tennis tournament in December; we are all geared up and ready to compete. It feels great to be on top”.