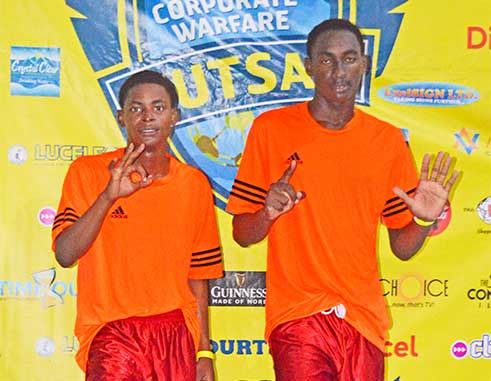 Goals continue to rain down on the Beausejour Indoor Practice Facility as the Corporate Warfare Futsal tournament continues with eight exciting matches over two days.

Tomorrow evening, in an All-Sandals derby, Sandals La Toc takes on Sandals Halcyon from 6.30 p.m; Bel Jou will face Saint Lucia Teachers Union at 7.30 p.m., KM2 Solutions will clash with the Ministry of Infrastructure at 8.30 p.m.; while at 9.30 p.m. Flow and PCD will look to settle their much awaited score on centre court.

On Saturday 17th, Sandals Grande will play the Saint Lucia Civil Service Credit Union from 6.30 p.m., Small Business Owners (SBO) takes on Top Ranking Electricals at 7.30 p.m., WASCO will come up against BuiltecInc at 8.30 p.m., and to bring the curtains down, Saint Lucia Teachers Credit Corporative will want nothing less than a win against Go Answer 1-888 at 9.30 p.m.

In the first game on Friday evening, FLOW defeated Digicel 5-3: goal scorers for Flow were,  Alex Rosemond  in the 5th minute, Anthony Christopher  in the 8th and 18th minutes, Kenwin McPhee in the 27th minute and Shane Evans in the 28th minute.

Goal scorers Digicel were Alex St. Cyr in the 10th and 25th minute and Aaron John in the 33rd minute.

In Game No.2, Saint Lucia Teachers Union breezed past Windjammer 5-2 with goals from Dyke Francis in the 13th and 16th minute and Lynch Isidore a hat trick in the 15th, 26th and 28th minute.

For Windjammer the goal scorers were Anthony James in the 20th and Ed Joseph in the 23rd minute respectively.

In Game No.3, the flood gates were opened as 11 goals were scored in the match between Small Business Owners (SBO) and defending champions PCD and for the second time in this year’s tournament the defending champions were beaten:  Scores in the game SBO 7, PCD 4. For SBO, the goal scorers were Christopher St. Catherine a hat trick in the 18th 19th and 34th minutes, Elijah Louis scored the second hat trick of the match with goals in the 6th, 27th and 35th minutes, Sylvannus Mann in the 31st minute.

For PCD, Wilson Charlemange in the 14th and 26th minutes, Joshua Prospere in the 20th minute and Winnel Felix in the 23rd minute.

The goal scoring continued into the final game on the evening card as Bel Jou trounced Go Answer 1-888, 7-0 with goals from Dean La Force in the 5th minute, Glen Auguste  in the 13th minute, Romiel Felix in the 20th and 37th minutes, Trevon St. Prix in the 23rd and 20th minutes and Quincy Charlemange in the 33rd minute.

On Saturday evening, despite the inclement weather, the BIPF came a live with another four exciting games and a total of 40 goals.

In Game 1, Sandals Grande defeated Beachcomber 12-4. For Sandals Grand, Tev Lawrence continued to make life difficult for the goalkeepers. This time Lawrence was a class act as he went on to score a double hat trick with goals in the 2nd, 13th, 18th, 34th, 35th, and 36th minutes. Louinus George also put his name in the hat trick column with goals in the 3th, 15th and 24th,Trevour Phillip in the 14th minute, Everton Regis in the 26th minute and Franklyn Edwin in the 40th minute.

For Beachcomber, despite being whipped, there was some positives to cheer about as Cliff Valcin scored his first hat trick of the tournament with goals in the 6th, 19th and 24th minutes and Jermaine Monrose the other in the 7th minute.

In Game 2, Sandals La Toc followed a similar path with their counterparts Sandals Grande as they defeated the Saint Lucia Civil Service Credit Union 8-1 with hat tricks from Ferguson St. Clair in the 16th, 19th and 21st minutes, Ravi Wilfred two quick strikes inside of the 20th minute and the 24th minutes, Melvin Aurelien opened the scoring in the 2nd minute of play and Nicarge Edward scoring in the 25th minute.

In Game 3, WASCO allowed the water to flow freely as they crushed the Royal Saint Lucia Police Force (RSLPF) 9-1; this was RSLPF worse outing since they made their grand entrance last year. For WASCO, the goal scorers were Valdez Maximin in the 4th and 24th minutes, Ahmed Chandler in the 11th minute, Lyntus Edwin in the 17th and 19th minutes, Lambert Samuel in the 26th minute, Garvin Phillip in the 31st Minute, O’Neal Remy in the 36th minute and Richard Annius in the 39th minute.

In the final game on the evening, KM2 Solutions and BuiltecInc perhaps was one of the better games  as it ended 3-2 in favour of KM2 Solutions.

For KM2 Solutions, Tamar Moise in the 19th and 20th minutes and Jason Similien in the 32nd minute