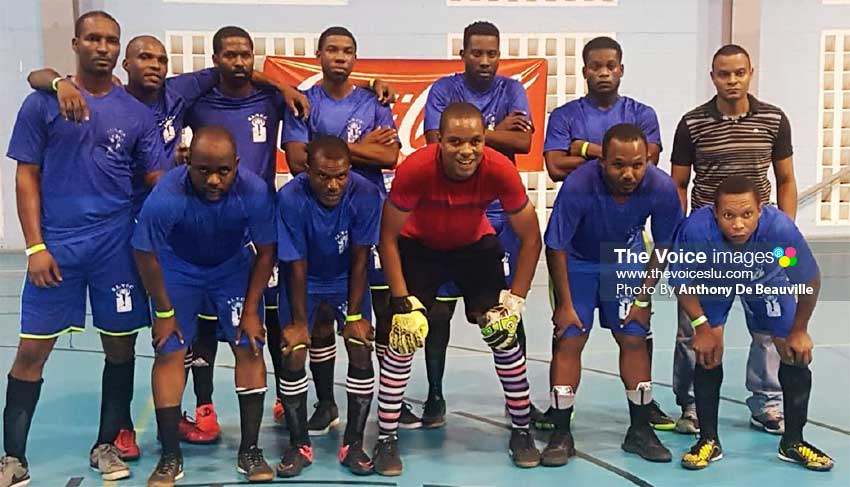 A new champion will be crowned when the final of the 2018 Corporate Warfare Futsal Tournament takes place on Saturday 8th December, as defending champions Peter and Company Distribution (PCD) were sent packing by Sandals La Toc 3-1 on Friday evening in front of an appreciative crowd at the Beausejour Indoor Practice Facility.

The semifinal action is scheduled for Friday 30th November, on centre court when Saint Lucia Teachers Credit Corporate will fancy their chances against Sandals La Toc from 7.30 p.m. and Small Business (SBO) will take on the Ministry of Infrastructure at 8.30 p.m., before then, VSV will take on BTC All Stars in a Legends exhibition match at 6.30 p.m.

The Saint Lucia Teachers Credit Cooperative were big winners on the night as they breezed past a spirited Built Inc team 5-2 with goals from Nehemiah Wilfred a hat trick in the 2nd, 8th and 29th minute and one goal each from the boots of Roger Leon in the 14th minute and Johnson Thomas in the 18th minute.

For Built Inc, the goal scorers were Jesse Stephen in the 13th minute and Fabian Philip in the 40th minute; Phillip’s goal was the 500th scored in this year’s tournament.

Small Business Owners (SBO) made a clear statement as they dispatched the Civil Service Credit Union 2-1, for SBO the goal Scorers were Elias Maxius in the 9th minute and Christopher St. Catherine in the 32nd minute. CSCU lone goal was scored by Baggio Lewis in the 35th minute.

The much anticipated matchup between defending champions PCD and Sandals La Toc lived up to the hype and anticipation with the latter going ahead 3-1 to secure their semifinal spot. PCD opened the scoring in the 7th minute to get things going through Dillan Lucien, but with only four substitutes on the bench Sandals La Toc upped their game a few notches when Melvin Aurelien scored the much deserved equalizer in the 15th minute to end the half 1-1.

On the resumption, it was all Sandals La Toc when their leading goal scorer Ferguson St.Clair made it 2-1 in the 25th minute of play to take his individual tally to 18 goals in the tournament, equaling Tev Lawerence (Sandals Grande).

With the minute hand ticking away and despite several scoring opportunities missed by PCD; Sandals La Toc was able to capitalize on their errors to score a third goal as Nicarge Edward right foot shot eluded the PCD goalkeeper to seal the deal in the 38th minute starting a celebration on centre court.