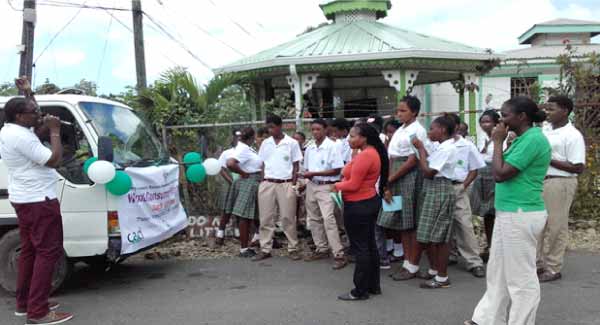 A LOCAL online news agency reported Tuesday that ‘A suspected severe case of mold infestation at the Babonneau Secondary School forced the suspension of classes at the learning institution Tuesday.’

According to information obtained by St Lucia Times, ‘students and teachers have been falling sick with doctors asserting that the illnesses must be linked to the school environment.’

According to the news report, ‘The conclusion was reached after medication that was prescribed for the illnesses made the symptoms disappear.

But the symptoms resurfaced once the affected persons returned to school, it was reported.’

Students affected have been enjoying the time off, but offering different reasons why they were not in class. Some encountered in Castries by a VOICE correspondent on Tuesday simply said: ‘Our teachers have reported sick, so we were sent home.’

However, following the social media news report, the Ministry of Education issued a brief statement confirming the school was closed, but offering a different reason.

According to the Ministry’s statement: ‘Parents of students attending the Babonneau Secondary School are informed that due to repair works taking place at the school, students are asked to remain home on Wednesday October 24, 2018.’

The statement did not indicate when school would reopen, but ended with the following advisory: ‘Parents are asked to stay tuned to the media for further announcements.’

But that as not all…

Yesterday (Wednesday 24 October), the ministry issued yet another statement on the subject, which said: “Parents of students attending the Babonneau Secondary School are informed that due to repair works taking place at the school, students are asked to remain home on Thursday October 25 and Friday October 26, 2018 respectively.”

And it (again) concluded: “Parents are asked to stay tuned to the media for further announcements.”

The students have had nearly an entire week off, while the ministry dithers on whether to acknowledge that the repairs being undertaken were motivated after teachers reported sick for mold infestation, or whether the school was closed to facilitate repairs.