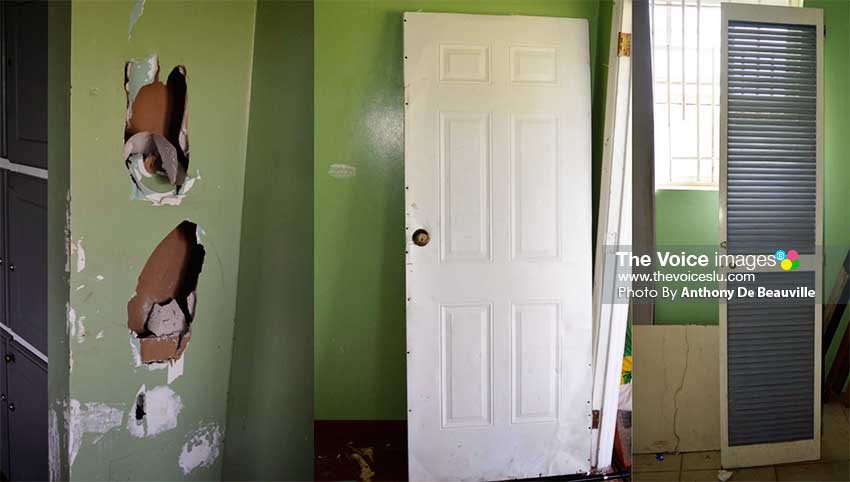 “I couldn’t be bothered about political implications”

MEMBER of Parliament for Gros Islet, Lenard Montoute, left no stone unturned last week as he made his intention clear when he sent out a strong message to vandals within the northern town.

Montoute, at the time, was addressing members of the executive of the Gros Islet Football League and representatives of the various clubs participating in the 2018 Spider Cup Football Competition.

The Minister said he was parliamentary representative for Gros Islet between 2006-2011 and just as he came into office the previous administration upgraded the Gros Islet playing field in time for the ICC Cricket World Cup, they built a changing room, fenced the field, upgraded the surface, but soon after the World Cup, the facilities were literally destroyed; the toilets were in a mess, the lockers were broken, the walls were destroyed, the fencing was thrown down. During my term in office I had to carry out the necessary repairs.

In 2010 there was another World Cup, and again carried out some major repairs to the Gros Islet playing field.

“Disappointingly not too long after that, the facility was thrown back into shambles; since I have returned as Parliamentary Representative, I have done work on the changing room; the water pumps and water tanks have gone missing, the fencing has been torn down; the repairs that are taking place right now for the ICC Women’s Cricket World Cup are actually needed; this is your facility”.

Montoute said, recently he saw a young man destroying the fence and when he spoke to the individual in question, his replay was, “That is government thing”.

“I don’t remember seeing government officials playing football/sports, you all are the ones playing/using the facility”. noted Montoute.

“The money being spent is indirectly your money; that money instead of every time repeatedly fixing the fence, fixing the changing room, purchasing a new water pump can be used for additional facilities, equipment and investing in you as sports people”.

“I am not accusing anyone of you present for being directly responsible; you have to take responsibility, if you see your peers doing damage to the facility, anybody you see vandalizing the facility, you should take a stand because they are doing harm to you. When the facilities are not available and they not up to standard you are the ones who suffer.

Montoute made a special appeal when he said, “This time around let us all see it as ours, let us all take the responsibility to ensure we protect it and preserve it”.

With a serious look, he said, “I couldn’t be bothered about the political implications of the statement I am going to make. If I ever see anyone vandalizing the facility, I am taking that person to the police and that person will have to go to court and face the consequences of vandalizing public facilities. It is time we appreciate and learn to respect public facilities”.

Montoute said, “I intend eventually to put cameras on the GIPF, to find out who it is that is doing the destruction of those facilities and when you are caught you will be made to feel the full brunt of the law and suffer the penalty so an example could be made of you for others to see, so we can begin to respect public property”.

“In the last 18 months we have had a situation because of all the confusion with the National Lotteries and Sports Saint Lucia Inc; we have had problems with regards to the maintenance of the playing facilities (cutting of the grass)”.

Montoute said, “He recognized the dependence is on government to do it, until we get the appreciation and empower ourselves sufficiently to become independent in that regard as Parliamentary Representative. I want to ensure going forward those facilities will be maintained on a regular basis and will try to ensure our surfaces not just Gros Islet but including Corinth, Monchy and Grande Riviere are maintained at a high standard”.

The District Representative, also mentioned to the gathering that, “I will be issuing contracts in November, so work can begin on the above facilities in terms of maintenance”. Maintenance of community playing facilities is now the responsibility of Local Government, which means that the councils will be responsible for those playing fields.

Montoute let the cat out of the bag, when he said, “I can speak with authority and confidence because very soon, I will officially take on the portfolio of local government in addition to Equity, Social Justice and Empowerment, if that becomes my responsibility I can assure you, you will find no room for criticism when it comes to the Gros Islet facilities”.