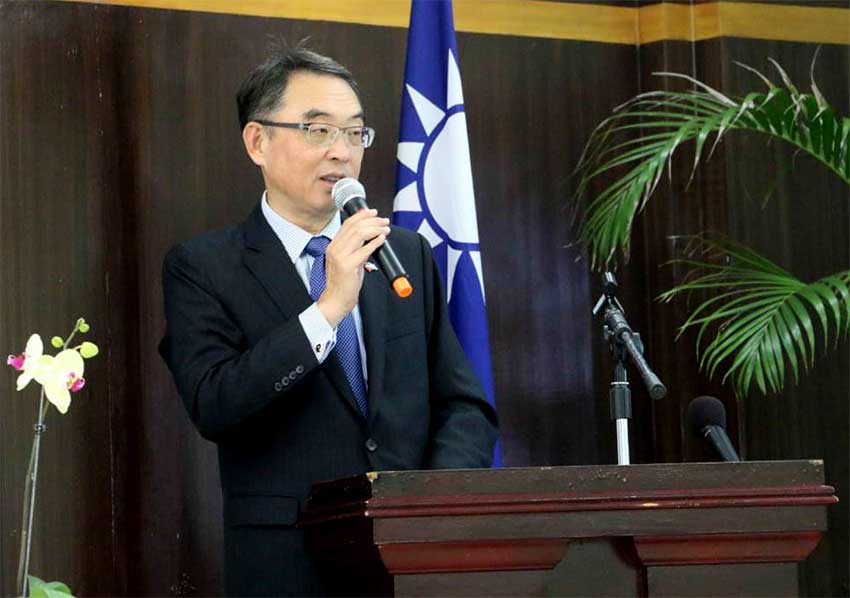 THE 1971 U.N. Resolution 2758, which decreed mainland China to be the only China recognised as a member of that organisation, and which simultaneously expelled Taiwan from U.N. membership, is still a highly contentious issue, 47 years after the fact.

Taiwanese Ambassador to St. Lucia Douglas Shen, sat down with the Voice and spoke in detail about what is known as the One China Policy, which all but 17 U.N. member states have adopted as their official stance on China and Taiwan.

Ambassador Shen asked rhetorically why Taiwan is still not recognised today as a member of the U.N., even though it meets the 17 Sustainable Development Goals that the U.N. outlined three years ago; assists states in the Pacific, the Caribbean, Africa and Latin America, and also meets all of the Human Rights standards, advocated by the U.N.

“But we know why this is” the Ambassador stated; alluding to China’s permanent seat on the U.N. Security Council and the influence it exerts to maintain this policy, which the Ambassador said contradicts the U.N’s own stance on human rights.

“The preamble of the United Nations Charter clearly states that this organisation’s mission is to reaffirm faith in fundamental human rights, in dignity and in the worth of human persons; in the equal rights of men and women and of nations, large and small.” Shen stated.

“Accordingly,” he argued, “each and every person of the Republic of China (Taiwan) should enjoy the same rights as those enjoyed by the people of other nations.”

Continuing in the same vein, he pointed out that the U.N. annually preaches and defends the values of equality and human rights and “therefore, it should not turn a blind eye [to the fact], that Taiwan’s 23 million people are deprived of the fundamental right to participate in the United Nations and its specialised agents.”

“So today I would like to emphasise that Taiwan is a member of this big family. I mean this whole world. So Taiwan’s basic rights should be respected. Taiwan should be included in the United Nations.” Ambassador Shen stated.

The history behind this very unique case of U.N. exclusion, is a rather complicated one, going all the way back to a post-World War II Chinese Civil War between Mao’s communist followers and Chiang Kai-shek’s liberal democratic followers.

The long and short of this history is that, having lost the civil war, the liberal democratic Chinese fled to the island of Taiwan and were subsequently included in the United Nations as the Republic of China.

However, the United Nations’ efforts to include Communist China into its organisation as well, eventually culminated in its 1971 exclusion of “the representatives of Chiang Kai-shek from the place which they unlawfully occupy at the United Nations.” [U.N. Resolution 2758] A decision Taiwan still opposes to this day.

“I would like to take this opportunity, to express my appreciation to Honourable Prime Minister Allen Chastanet. He [spoke up for] Taiwan at last year’s General Assembly and I believe the leaders of this country, whether it’s the Prime Minister, or other ministers, will speak up for Taiwan again.”

St. Lucia is one of the 17 U.N. member states who recognise the Republic of China (Taiwan), so I asked the Ambassador, what that relationship means to Taiwan. He replied: “With St Lucia, Taiwan is very appreciative that we have such a good friend in the Eastern Caribbean. And again I would like to take this opportunity to say thank you for the support of our friend.”

The opening of the 73rd Annual U.N. General Assembly was on September 18, with the high-level General Debate slated to begin on September 25 next week.