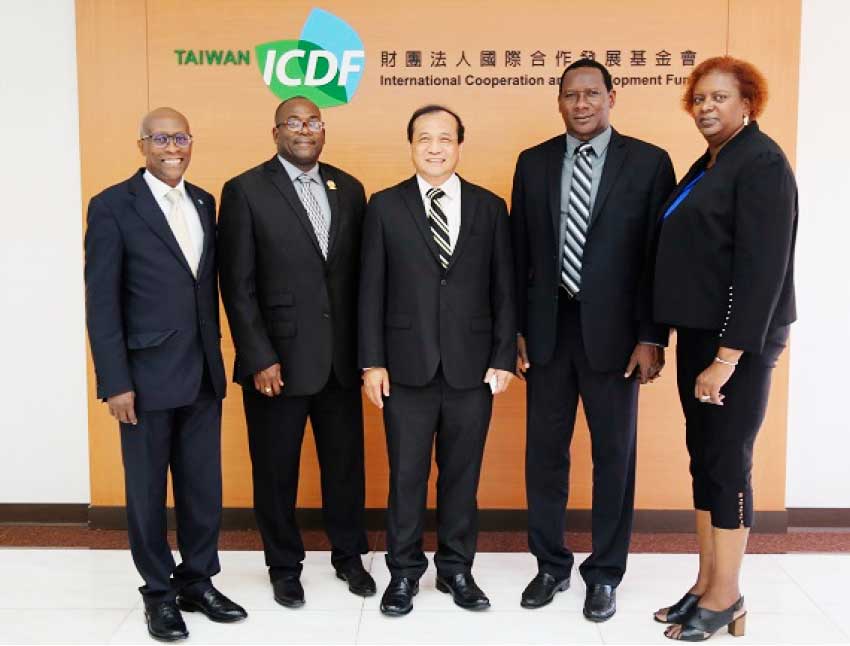 The Ministers had a full schedule of meetings with various Government Ministries including the Ministry of Foreign Affairs where they met the Vice Minister and senior officials. They also met with various key agencies.

Their first major meeting was held on the 7th August, with the Minister of the Interior, Hon. Hsu-Kuo Yung. At that meeting, the Ministers discussed St Lucia’s Infrastructural Development with which Taiwan is assisting and which greatly benefits the tourism industry.

They also discussed other areas including alternative energy and noted that cooperation could be informed by the tremendous advances being made by Taiwan. They recognised the value of continued collaboration in sharing knowledge and technology to benefit start-ups and contribute to sustained growth and development of the country.

Later that same day, the Ministerial Delegation met with the International Cooperation and Development Fund (ICDF). Its Deputy Secretary-General Dr.Pai-Po Lee, who headed the delegation reported on the status of the on-going Taiwan funded development projects in St Lucia including the GINet Project and Banana Productivity Improvement Project.

An important fact that emerged in the discussions was that there is a department of the ICDF for Lending and Investment, that provides overseas loans, for economic infrastructure and transportation, but it does not currently support any projects in St Lucia. Minister Montoute took note of this unused facility and indicated that St Lucia will explore the funding and investment opportunities that could emerge.

The next day, August 8, the Delegation met Director – General of Sports Administration, Dr. Kao Chin-Hsung. They acknowledged that both countries would profit from ongoing collaboration in sports. They agreed however to consider broader and deeper collaboration including, exchange programmes for students and sports scholarships and attachments, the development of P.E teachers and supporting and providing coaches, including at the international level.

A particularly useful meeting was held with the Minister of Culture, Hon Cheng-Li Chiun.

She outlined Taiwan’s investment, experiences, and efforts in assisting young entrepreneurs in the cultural industries. She was certain that St Lucia would, just as Taiwan has, benefit from supporting and investing in its cultural entrepreneurs and startups; for which Taiwan would be supportive.

The delegation then discussed with the Minister concrete initiatives for cultural exchange, including the possibility of St Lucia’s internationally renowned artistes participating in music festivals and similar events in Taiwan. Other cross-cultural programmes could include the creative collaboration between Taiwanese and St Lucian students in Taiwan.

At all of the meetings, both Ministers Montoute and Estephane expressed sincere gratitude and deep appreciation for the valuable assistance that Taiwan has been providing Saint Lucia. They pointed out how important the contributions have been to the economic and social development of the country.

A theme that was continuously repeated at the meetings was Taiwan’s very deep appreciation for the support that St Lucia has been providing at international meetings. Both sides agreed to upgrade collaboration in the areas that were addressed and looked forward to the continued strengthening of bilateral and mutually supportive ties.

The delegation also visited the St Lucia Embassy at its new location in the Diplomatic Compound. The Ministers held wide-ranging discussions with the Ambassador, Edwin Laurent. Amongst the matters discussed were the operations of the Embassy as the face of the government of St Lucia in Taiwan and ways in which it could provide greater support in achieving national goals. The Ambassador detailed on-going plans and underscored the importance and value of communication engagement between the Embassy and the Ministries in St Lucia.

It was agreed that the Embassy will follow up on the various meetings to ensure implementation of the decisions and the ambassador has since written to all the Ministries visited, as the first stage of the follow-up. (Taiwan Embassy)