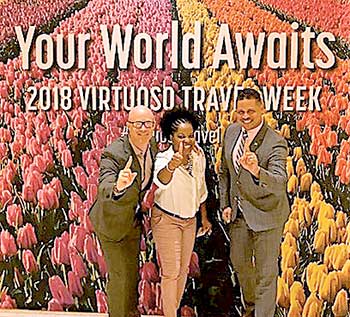 3THE Saint Lucia Tourism Authority (SLTA) participated in the Virtuoso Travel Week program in Las Vegas, Nevada from August 11-17, 2018 for the first time since the destination became recognised as a Virtuoso preferred partner earlier this year.

And Saint Lucia has proven, yet again, why it is one of the premier destinations in the world with one of its top luxury properties copping another major award.

Virtuoso is a network of the best luxury travel agencies, with more than 17,500 advisors worldwide representing the best of the best in travel, with a portfolio of nearly 1,700 preferred partners – top hotels, cruise lines, tour operators, and other tourism interests.

During the awards program, the BodyHoliday won the Best Wellness Program honor beating out all other luxury properties in the virtuoso program from around the world. And, as is to be expected, the resort was thrilled about its victory.

“BodyHoliday is grateful to be receiving this award voted by the Virtuoso travel agent community. Just being nominated has been an honor and we will continue to deliver on our promise – ‘Give us your body for a week and we’ll give you back your mind,’” said the Head of Marketing for the BodyHoliday, Armin Dada.

This was the 30th anniversary of Virtuoso Travel Week, and the SLTA was among the more than 6,000 attendees at the luxury event.

On Saint Lucia’s participation, the SLTA’s Marketing Director for the United States, Kelly Fontenelle stated, “Saint Lucia is quite pleased to be a partner and welcomed nine agents as special guests on its hosted table during the destination showcase dinner. The event was a tremendous success giving the destination access to over 2,000 advisors in attendance through one-on-one appointments, and the social networking events. “

Over the four-day period, Fontenelle and the SLTA’s Sales Manager for Trade, for the US, Richard Moss, conducted more than 200 one-on-one appointments in addition to some off site-meetings creating increased opportunities for Saint Lucia’s inspiring tourism product.

The SLTA congratulates the BodyHoliday on its recognition as the world’s Best Wellness Program and shares in the pride that the honor brings to the resort and to the destination. (SLTA)