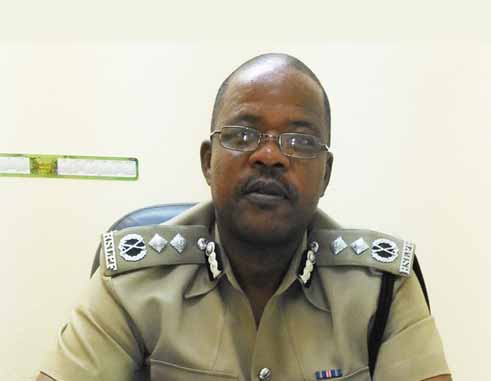 POLICE Commissioner, Severin Moncherry, has confirmed that he may – or may not – vacate his seat, be it soon, or later.

Moncherry made the disclosure when questioned about reports that he is being forced to go on leave, allegedly to make way for a new person at the helm of the Royal Saint Lucia Police Force (RSLPF).

But as far as the Top Cop is concerned,, this is Fake News.

“As far as I know, I have never been asked to go on leave by anyone — and there is no indication that I am going on leave or being forced out in any way, form or fashion,” he said.

He said he has “a good rapport and a good relationship” with both National Security Minister Hermangild Francis and Prime Minister Allen Chastanet.

“We have a lot of plans that we are working on together,” Moncherry asserted.

However, he disclosed that he’s been examining his options and will not rule out the possibility proceeding on leave, of his own volition, to pursue personal development.

In that regard, he said, he may apply for early retirement. But he stressed that he has never been asked to go on leave or forced to do so.

“Life has not been made difficult for me in any way so as to push me out,” Moncherry told the online news agency.

Asked how soon the nation may know of his decision on whether he will proceed on early retirement, Moncherry revealed that he was “looking at the early retirement” coinciding with his 53rd birthday in June, 2019.

He said early retirement has been on his mind for some time.

“However, considering the current status of the country and the force itself, I would not want to abandon ship – I would want to bring things to a certain level of normalcy before I make my final decision.”

He is therefore considering going to study and then going into private law practice.

Nevertheless, he made it clear that he has “not yet finalised anything.”

“I have not even discussed it with my minister or the prime minister,” he confided.

The Top Cop confirmed, however, that leaving his post before retirement age “will have to be approved by Cabinet.”

Similar sentiments have been expressed by the National Security Minister, who confirmed in a subsequent VOICE interview that the bond between him and the Commissioner is solid as a rock.