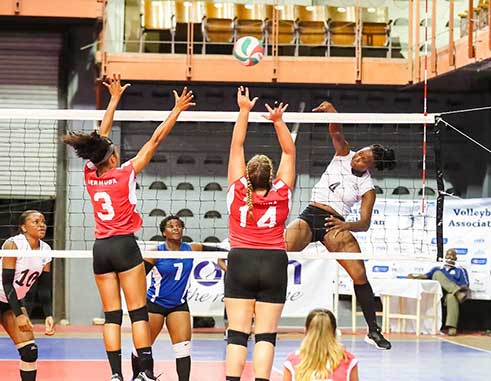 DEFENDING champions Saint Lucia opened their campaign as they cruised to a 3-0 victory (25-9; 25-13 and 25-9) over Bermuda on the opening night of the Eastern Caribbean Volleyball Federation senior women’s championship currently taking place in Antigua and Barbuda.

According to reports from Antigua, the game which started at midnight Thursday, August 16 was more of a no contest as the experienced Saint Lucia team had their way in all the aspects of play.

Saint Lucia outscored Bermuda 27-7 in Spikes, 6-1 in Blocks and 10-1 from the service line. Added to that, Saint Lucia earned 33 points from errors while only giving up 23.

Kerin Neptune led all scorers with 15 points which included 9 Spikes and 2 blocks and 5 aces. There were also modest contributions from Yoshebel Emmanuel with 9 points and Lisa Casimie with 8.

For team Bermuda SyMcPeek had 6 points while only 2 other players managed to score.

Coach Juanita Blee of Bermuda was not dispirited however. “We knew coming here that there will be some very tough games but this is something we have to go through while rebuilding. Now that we have gone passed that we have taken away a number of learning nuggets and we intend to apply them in our next games,” she stated.

Saint Lucia Coach Kendall Charlery was unfazed. “Although it was relatively an easy game I still wanted us to execute the game at a high standard, we had a few lapses particularly in the second set but with strong reminders we were able to refocus and stick to the game plan”, he said.

Saint Lucia had a night off on Friday, but is scheduled to play Dutch Saint Maarten at 9.00 a.m. today.

Team Manager Timothy James speaking from Antigua told the VOICE, “If Saint Lucia wins Dutch Saint Martin they will be going straight into the semifinal round to await the teams in the quarterfinal round. However, there are quarterfinal matches scheduled for this evening between the second and third place teams in the two groups. The winners of these games will then play the first place winners of Group A and B in semifinals action on Sunday 19th.

Reneisha Stafford of Grenada led all scorers with 17 points and proved to be the big difference between the two teams with 11 spikes 3 blocks and 3 aces from her position as middle blocker. She was supported by Shakira Collymore with 10 points from the Opposite Hitter position.

For Dutch St. Maarten, AkilahMuelens had 10 points in a losing cause while none of her teammates reached double figures.

Antigua Barbuda emerged as winners by a very narrow margin against Saint Kitts and Nevis; Saint Kitts and Nevis coming from two games down to draw level, then in an extremely tight decider losing by 2 points. The epic 5 setter went to the host much to the relief of the home crowd 25-15,25-18, 19-25, 22-25 and 17 -15.

Mali Peters Middle Blocker from Antigua was the most dominant player on the night chalking up a whopping 27 points made up of 17 spikes, 6 blocks and 4 points from the service line.

Opposite Sharon Payne chipped in with 12 points while Outside Hitters Joelle Thomas and Naheemah Wilson contributed 11 and 10 respectively.

St. Kitts and Nevis effort was led by their two most experience players Captain Antoinette Henry (Outside Hitter) and Shanicia Dyer (Middle Blocker) who had 13 points each.