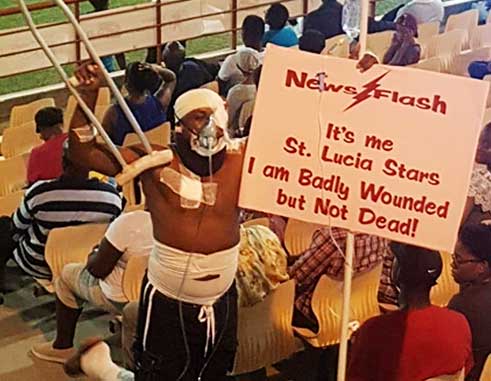 WITH 15 defeats mirroring them in their faces, many cricket fans from near and far and most importantly Saint Lucians are asking the mystery question as to whether the Saint Lucia Stars will be able to seep through the clouds in their remaining matches in Saint Lucia.

Despite losing to Trinbago Knight Riders, hundreds of cricket fans were expected to take in the showpiece last evening as the Stars took on Barbados Tridents at the Daren Sammy Cricket Ground.

More details of this matchup will be in the VOICE Tuesday 21st August edition.

Following Friday’s encounter against Barbados Trident, the Stars will take on Saint Kitts and Nevis Patriots on Tuesday 21st at the DSCG starting from 6.00 p.m.

But even before going into details as to what transpired on Thursday evening on the pitch, the VOICE has learnt that St.Lucia Stars manager, Mohammed Khan has resigned. The SLS management has remained tight lipped on the situation.

Meanwhile, with three winless matches on the trot, on Thursday evening following half centuries by David Warner, Rahkeem Cornwall and Kieron Pollard the Stars were at the losing end yet again giving the Dwayne Bravo Trinbago Knight Riders a five wicket win with only a solitary ball to spare.

David Warner 72 not out, Rahkeem Cornwall 53 and Kieron Pollard 65 not out, each in contrasting styles took the home side to 212 for the loss of two wickets in their allotted 20 overs.

In reply, Darren Bravo and Brendon McCullum launched a squash buckling onslaught with a 137-run fourth partnership to denied the Stars any chance of collecting a point since 2016.

For the first time in this year’s tournament, Warner meant business as he stroked an unbeaten 72 off 55 balls, but on the way he lost his opening partner Andre Fletcher in the sixth over, caught at backward point, to a mistimed cut off fast bowler Shannon Gabriel for 17. Rakeem Cornwall who was promoted in the order did not disappoint the crowd; he made a whirlwind 50 off 25 balls before nipping one behind as he tried to swing a wide delivery from Javon Searles to the leg side, he made 53.

There was no letting the foot off the gas as the Stars third-wicket pair of Warner and Kieron Pollard added 84 unbeaten runs off the final 32 balls. Most of those came from the bat of Pollard, who scored a joint-fastest half-century in CPL history, getting there in just 18 deliveries.

The Stars captain, Pollard hit seven sixes in his 65 not out off 23 balls.

Needing 213 for victory, TKR were pegged back for a brief moment, one can say, as Cornwall backed up his impressive batting display by striking twice in the Power play with his offspin picking up the wickets of Sunil Narine caught Pollard for 9, a good diving catch and Chris Lynn LBW for 4.

Knight Riders however fought their way back with a 51-run stand between McCullum and Colin Munro to reach 74 for 3 after 10 overs, just 14 runs behind where the Stars were at the same stage.

Discarded West Indies top order batsman Darren Bravo was next in at the fall of Munro in the 10th over at 74 for 3.

With the score on 128 for 3 after 15 overs, and having just brought up a fifty partnership with McCullum, Darren went berserk in the 16th by hoisting four consecutive sixes off Pollard to start the over; a two off the fifth ball was followed by another six off the final delivery to complete the most expensive over in CPL history.

There was no stopping Darren on the night as he remained on 94 not out off 36 balls, which included six fours and ten sixes, four of the sixes coming off his compatriot Kieron Pollard.

Over No.19 was a good one for the Stars bowled by Mitchell McClenaghan, who picked up the wickets of McCullum caught behind by Andre Fletcher for 68 and Jevon Searles also caught behind for 0.

It was down to the final over of the encounter as the experienced West Indies wicketkkeeper/ batsman DeneshRamdin hit the fifth ball for six off Obed McCoy sealing the victory and most interestingly the 34th six which also equalled the record for most sixes in T20 history.