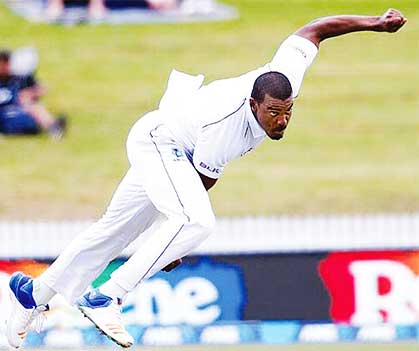 The Windies will be looking to seal the three-match series following last Sunday’s 226-runs win at Queen’s Park Oval in Trinidad and Tobago.

The records will show that it was the West Indies first Test win in a decade against Sri Lanka and their biggest margin of victory against the visitors in Tests — and also their biggest against any opponent in terms of runs at the Queen’s Park Oval.

Weather-wise up until Saturday, according to forecaster Webster Gajadhar at the Hewanorra Meteorological Service, is expected to remain mostly fair, with hazy conditions and a slight chance of a few brief showers.

The West Indies opening pair of Devon Smith (7/20) and Kraigg Brathwaite (3/16) will want to come good, as they did not get the kind of start they were hoping for at Queen’s Park Oval and, based on the wicket preparation.

Up until Wednesday, the wicket is expected to favor both batsman and bowler and the toss will be an interesting one.

Trinidadian fast bowler Shanon Gabriel is expected to lead the Windies bowling attack, alongside the experienced Kemar Roach, Miguel Cummins, Jason Holder, leg-spinner DevendraBishoo and part-time bowler Roston Chase, who had figures of 4 for 15 with his right-arm off-breaks in Sunday’s victory.

Just before press time on Wednesday, the news was that Angelo Matthews had left the tour to return home due to personal reasons, while fast bowler LahiruGamage had been ruled out of the tour as well, due to a fractured finger he sustained on the fifth morning in Port-of-Spain when he was hit on the glove by Shannon Gabriel.

According to reports from the Sri Lankan camp, replacements will be flown out, but given the length of the flight the two players are almost certain to be unavailable for the second Test.

Batsman DanushkaGunathilaka and all-rounder DasunShanaka were expected to leave Sri Lanka last evening. But despite their unavailability, the Sri Lankans may not be too disturbed having traveled to the Caribbean with 17 players, rather than the usual 15.

Regardless, Sri Lanka Captain Dinesh Chandimal will lead the batting charge with KusalMendis centurion in the second innings at Queen’s Park Oval, while Roshen Silva and Dhananjaya de Silva will also want to show slate.

Captain Chandimal will depend heavily on his bowlers this time around, as they failed to bowl-out the West Indies in both innings of the Trinidad Test (414 for 8 declared and 223 for 7 declared).

SurangaLakmal is expected to spearhead the bowling attack and will have alongside him fellow quicks LahiruGamage and Lahiru Kumara.

Meanwhile, the experienced RanganaHerath cannot be taken for granted, as well as spinner AkilaDananjaya.