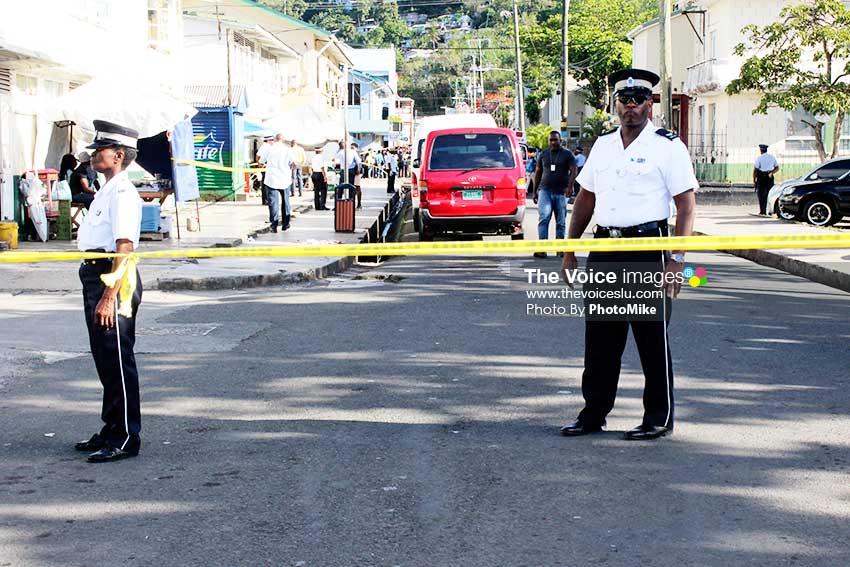 MAYOR of Castries, Peterson D. Francis, has called for unity to eradicate criminality and for the relevant authorities to step up their efforts at tackling the root causes of violent crime in St. Lucia.

The call came in a statement released by Francis on Tuesday, one week after Lewis Street and Peynier Street, in the shopping center of Castries City, were ripped apart by gunfire between feuding gangs.

One man was shot dead and four others wounded, including a nine-year-old girl who was supposed to write her Minimum Standards Exams the following day.

It is expected that more charges will follow since one man was fatally shot.

And what about the wounding of the Grade Four student? Someone has to be charged for that. But the Police, it seems, are meticulously taking their time to dot the i’s and cross the t’s in this matter.

But it’s not the police that’s the focus of this article, it is the statement released by Mayor Francis that is.

Such calls having been made over the year, but have had no positive impact on violent crimes committed. The VOICE Newspaper can attest to that, as well as the department within the police force that is responsible for crime.

According to Francis, “Various agencies should be doing much more in arresting violence. Parents, schools, churches, neighbours, politicians’ and other community leaders must work together and pitch in to help thwart the causes behind these crimes.”

Francis seems to have forgotten that these have all been tried in the past: Candle light vigils, neighbourhood watches, crime symposiums organised by politicians, schools and churches have continuously preached and role played the importance of staying away from crime to their young charges, speeches, marches and the list goes on.

None of the aforementioned has worked to any great degree. Today we still have people brazenly shooting it out with each other in broad daylight, totally indifferent to the harm they may cause to the innocent people around them.

While I concur with him that crime should not be made a government issue, I firmly believe that government is not doing enough to fight violent crime in the country.

Persons found guilty of capital murder no longer live with the fear that their days are numbered. Instead they are given life sentences which amounts to 20-25 years of imprisonment, all these time eating, sleeping, exercising, aging nicely, all paid for by the taxpayers.

How could we have the death sentence on our books and not apply it? Yet some are saying do not blame government for violent crimes in the country.

The safety of citizens should be the government’s number one priority and it should be doing all it can to create a safe environment for them.

Such an environment would mean the setting up of close circuit television around the city center, something promised by this very administration, which under Guy Mayers as Home Affairs Minister actually started but died shortly afterwards.

While it is understood that citizens too have a role to play in helping curb violent crimes, let it not look like citizens must take the lead in fighting crime as Mayor Francis’ press release seems to invoke.

The government has to take the lead in fighting crime. It has the resources to do that. Citizens will have to help, that is understandable. However government cannot and should not give the impression that this joint venture is a 50/50 shared undertaking.

I concur with Francis though that “violent crime will not be tolerated in this city especially by those who come into Castries to perpetuate violence and threaten our citizens’ and visitors’ security.”

His point that Central Government had invested thousands of dollars with the installation of the city constabulary and its disciplined members to police the city day and night is well taken. This is good and I am sure has worked towards changing the minds of certain miscreants bent on performing some mischievous act in the city.

Mayor Francis was on target when he said that these measures alone are never going to be enough.

National Security Minister Hermangild Francis has yet to present to the people a comprehensive plan detailing how government intends to ensure the safety of citizens in the city as they ago about their busy schedules.

However his brother, the mayor, is correct in calling on the relevant authorities to step up their efforts at tackling the root cause of violent crime in the city.

The relevant authorities in that case could be summed up to mean the government. It is the government that could create an environment conducive for private sector development which means more jobs, which in turn means employment for the unemployed, which in turn means to those people a sense of dignity and self-worth, which helps in turning the unemployed from a life of crime.

Too much lip-service from government is being paid to crime.

Last Tuesday’s deadly gun fight in the heart of the city is proof enough that action and only action is needed.

Nothing other than that will suffice.