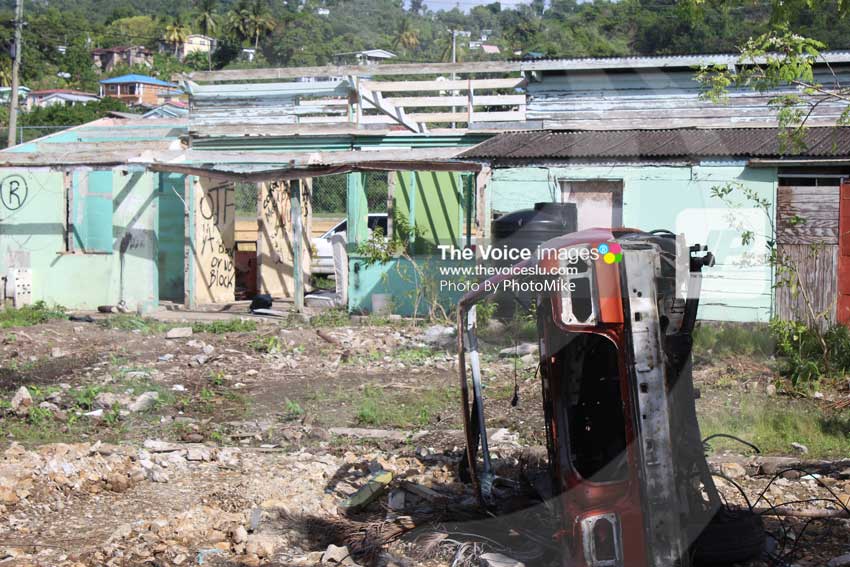 ONE month after establishing their own association to fight for their rights, occupiers of Bachelors Quarters — better known as the ‘La Clery CDC’ apartments — are gearing-up for perhaps the biggest fight of their lives.

They have been dragged before the courts and today they plan to assemble near City Hall in Castries — dressed all in white — to draw attention to their plight.

The troubled tenants are being sued by the St. Lucia National Housing Corporation (NHC) — formerly the St. Lucia Housing Authority — for trespassing by unlawfully and wrongfully occupying the lands and apartments.

The NHC also said that the members of the association being sued are “not the original occupiers or tenants” of the apartments and is asking the court to have the current occupiers pay it $34,000 — the estimated cost of re-engaging a private contractor to re-develop the area.

The long story started early this year, when the NHC wrote to the occupiers on 19th February 2018 demanding possession of its premises.

The Corporation, on 3rd May 2018, wrote a second letter to the occupiers, advising them that demolition of the premises was to commence six days later.

A third letter, dated 23rd May 2018, was also issued to the occupiers of Bachelors Quarters demanding possession of the buildings.

The occupiers in reply, via a letter dated 28th May, 2018 called on the NHC to revoke its notices, which the NHC rejected and contracted a private contractor to demolish the remaining buildings.

The execution of the demolition contract was scheduled for 2nd May, 2018 but rescheduled to 9th May, 2018. The demolition did not take place on that day, but rather 13 days later, with the scheduled completion date being 8th June, 2018.

According to the NHC, “the demolition and performance of the contractor were frustrated by the occupiers, resulting in the contractor not being able to fulfil his contract.”

The $34,000 being claimed by the NHC through its legal action is the estimated cost to remobilize the contractor — a cost the NHC says it cannot afford, but which it has to pay, “together with all other amounts reasonably incurred as being occasioned and incidental to the delay caused by the occupiers’ wilful and wrongful refusal to vacate the NHC property.”

But the occupiers are fighting back, determined not to be beaten by the NHC — and by extension the government, which they say is “heartless”.

The protesting occupants of the dilapidated entities legally grouped themselves into a housing association called the Tafari Charlemagne Community Housing Association, named after a tenant in the same disposition who died through electrocution earlier this year.

Meanwhile, over 200 local residents (in and around the immediate La Clery CDC area) have signed a petition calling on the authorities to engage and empower the Association in the process of regenerating and redeveloping the community.

Marcus Day, Public Relations Officer for the Association, said the documents filed by the NHC legal team in the Civil Court six days ago “are incomplete”, in that “a document from the previous Housing Minister, Stanley Felix, that seems to support the occupiers position, was left out of the pile of documents filed in court by NHC lawyers.”

Citing “the necessity for housing the poorest of St. Lucia’s poor,” Day said that last year Chairman Timothy Mangal declared that the NHC was “bankrupt”, resulting in some social housing advocates suggesting the NHC is “unfit for purpose” and “should be the subject of a performance audit to find new ways of getting it to fulfil its mandate of providing access to housing for low income Saint Lucians”.

Day said the residents, many of whom are descendents of the victims of the great Castries fire 70 years ago this week, recently formed the association with a mission to “improve access to affordable housing and the quality of community life for low income residents of La Clery CDC and North Castries.”

The association has called on the NHC to “engage” them “in an empowering manner, in the process of regenerating and redeveloping the community’s housing stock.” But the NHC appears to be dismissive of the calls for inclusion and engagement, referring to it as “a guise of social conscience”

The NHC claims the occupiers “are trying to justify their unlawful trespass under the guise of a social conscience” by forming a foundation in the name of a young footballer.

The NHC wants the court to “restrain forthwith the occupiers from entering onto and/or remaining in occupation of the lands with erected buildings on them.”

The NHC says it is the registered owner of the lands and buildings and therefore entitled to possession, while the occupiers are trespassers who have unlawfully entered into occupation of its property — particularly units 20, 30 and 31 of Bachelor’s Quarters — after the original tenants were relocated and paid a gratuitous sum, which The VOICE learned was $10,000 each.

The NHC is seeking “damages, costs hereof, interest thereon at the rate of six percent from date of judgement, vacant possession of its premises, a mandatory injunction directing that the occupiers, each forthwith vacate its property.”

“Seventy years after the descendants of these people were made homeless as a result of the fire, their families are still housing-insecure and destined to be displaced again, never finding peace and security,” Day said.

The NHC, meanwhile, has requested an expedited hearing and the claim is scheduled to be heard on Monday, June 25 at 9 am in Chambers.