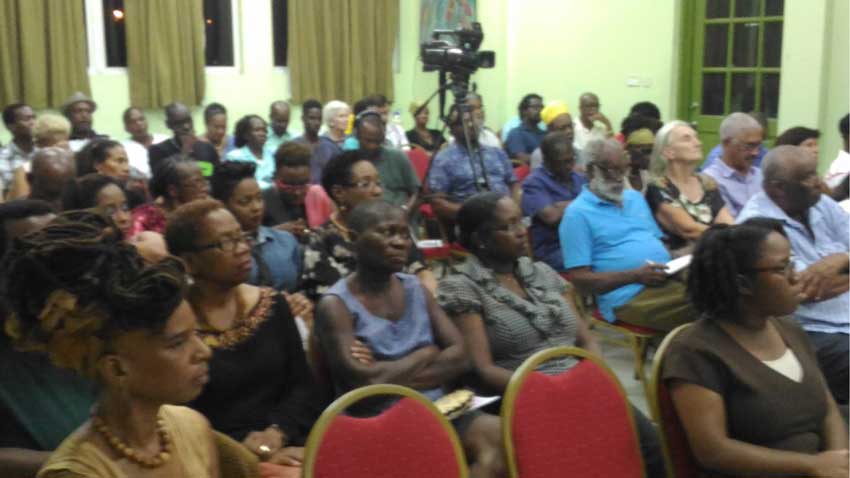 The Simmons Memorial Lecture was revived at the last Conference in 2016 with the support of the Julian R. Hunte group of companies which continues its support of the key-note lecture. Sir Julian Hunte was among the audience.

A full house was present for the Simmons lecture and heard Dr. Octave speak with authority and confidence on her theme “Tan fè tan, tan kité tan: negotiating a balance between tradition and change.” Remarks were made by Ms. Floreta Nicholas, Chair of the FRC, Ms. Dawn French, the Deputy Permanent Secretary in the Ministry of Culture and Ms. Celeste Burton of the CDF.

On Wednesday 20th, papers were delivered at the CDF Conference Room from 9 am. The overall theme of the Studies Conference was “Popular Culture, Entrepreneurship and the Saint Lucian Ethic.” Speakers included Embert Charles, one of the coordinators of this year’s meetings and the first Executive Director of the FRC, architect Mark Hennecart, UWI graduate students April Louis and Rhyesa Joseph, Dr. Kentry JnPierre and SALCC lecturer and St. Lucian writer Vladimir Lucien. Topics covered the Queen’s Chain to calypso and society in St. Lucia; from traditional Koudmen to African religious systems of Ifa.

In the light of the recent disaster which has thrown into sharp relief the preservation of national and cultural archives, a panel discussion was organized titled “Cultural preservation, sustainability of livelihoods and identity.” Panelists included representatives of the National Association of Librarians and Information Professionals (NALIP), FRC and the National Archives.

Msgr. Anthony, in the final session at the Pastoral Centre on Wednesday night, presented a paper entitled: “Dreams for my people: a cultural manifesto.” He set out a vision for the immediate future of the FRC recently devastated by fire on March 25th. He also made a proposal for national celebration of various cultural themes on an annual basis. He proposed that 2019, the 40th anniversary of St. Lucia’s Independence, be celebrated as Lané Koudmen (Year of Koudmen). Details will be formulated and released in time for Creole Heritage Month in October.

At the Pastoral Centre, cameraman Jeremiah Joseph made a presentation to the FRC of several hours of earlier recorded programmes and activities of the FRC taped over several years. This will provide an invaluable resource as the FRC begins to rebuild its library and documentation centre.

Papers delivered at the Conference and the Simmons Memorial lecture will be published by the FRC.

This year’s edition of the Conference was jointly hosted by the Msgr. Patrick Anthony Folk Research Centre and the Cultural Development Foundation. Various entities provided financial support including the Government of St. Lucia, LUCELEC and Bank of St. Lucia. Other support was given by UWI Open Campus, and Mr. Evaristus JnMarie.