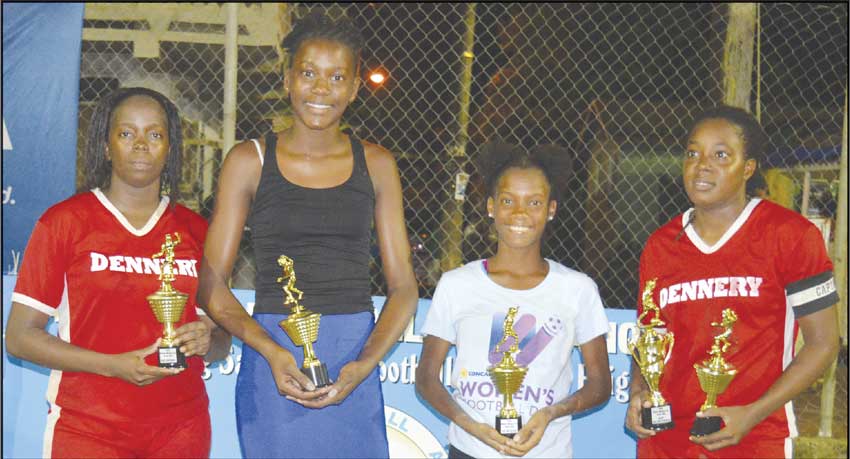 THEY are quickly becoming a household name in women’s football in Saint Lucia — and for the second year running, the Dennery women’s senior football team has emerged champions of the Saint Lucia Football Association’s senior women’s tournament held on Saturday 23rd June at the Anse la Raye playing field.

The evening contest, played under overcast skies, a persistent rain and a small crowd on hand that took the action outside the perimeter of the playing field (as supporters were not allowed inside the playing area) decked in their customary red and white attire, Dennery women footballers were made to work hard for their win over a skillful Soufriere/Canaries team.

This time around, playing in the defense, captain Ellisa Marquis put Dennery ahead in the 19th minute, when her right-foot shot eluded Soufriere/Canaries custodian Megan Nestor.

Soufriere/Canaries had several scoring opportunities and on the stroke of the halftime whistle Sasha Prospere found the much-deserved equaliser as both teams went into the halftime break with the scoreline even.

On the resumption, with Referee Sabina Kerton in charge, both teams up the tempo a notch, despite the condition that had gotten worse and made life difficult for the ladies.

Zenna Amedee put Dennery further ahead in the 55th minute to make it 2-0, and Marquis later sealed the deal with a right foot penalty kick to make it 3-0 in the 90+2 minutes of extra time to grab hold of the championship for the second year running.

In the third place playoff, Vieux Fort North defeated home team Anse la Raye 1-0, from an own goal scored by Daniella Poleon in the 10th minute of play which is how the scoreline remained up until the final whistle.
Awards presented following the showpiece on the pitch: Goalkeeper of the tournament- Meggan Nestor (Soufriere/Canaries, Best Defender – Ayana Vitalis (Dennery), Best Midfield player -Stephanie Allain (Soufriere/Canaries), Most Goals – Elisa Marquis (Dennery); Marquis also collected the Most Valuable Player award.

Assistant General Secretary/Technical Director of the Saint Lucia Football Association Ces Podd spoke to the VOICE about the match and progress made thus far in women’s football in Saint Lucia. This is what he had to say: “The tournament was an example how far women football has come in Saint Lucia. In the final we saw two highly technical teams, although it ended up 3-1, both teams had a good understanding from the coaches, they both came out with a game plan.”

He singled out Marquis for her outstanding performance, He said: “ I am concerned someone with her ability is not playing professional football in one of the women’s team in the USA or Europe that is something we have to make sure doesn’t happen with our gifted players. We need to try and get them out there. Over the last year I have seen her, she has had an exceptional year.

“In terms of development, the Saint Lucia senior team won the Caribbean Football Union female champions in Saint Kitts then went to Antigua where they won two out of three games. I am really happy to see the way women’s football is moving forward. I want to see the coaches and the women continue their keen interest in and their development in the sport.”

What next for women football in Saint Lucia? Podd said, “In August the under-15s will be heading to Florida to take part in World Cup Qualifers. I am expecting good things from them; this young team has already experienced international football when they went to Florida two years ago; they also played in the Under-17 World Cup qualifiers at the Darren Sammy Cricket Ground last year and did really well, some of them can still take part in the next under-15 tournament.”