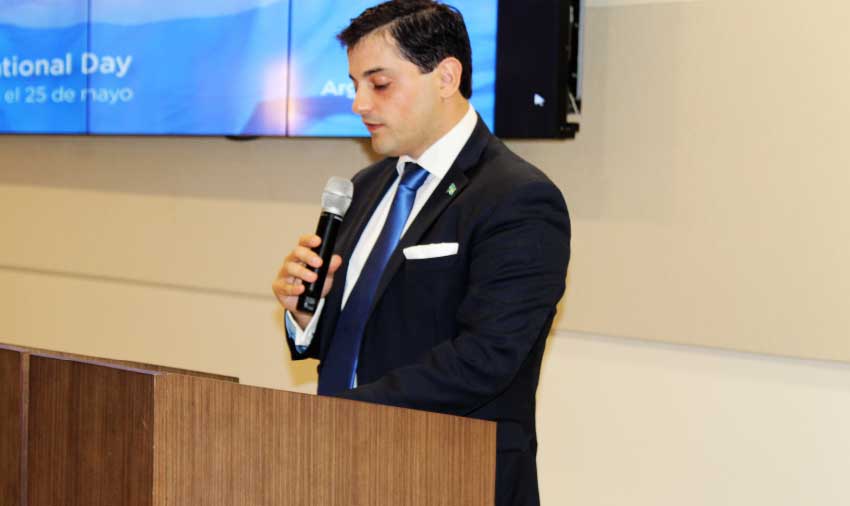 SAINT LUCIA and Argentina are holding talks to begin a process by which Argentine beef could be imported into St. Lucia.

This was revealed by the Charge d’ Affaires of the Argentine Embassy in St. Lucia, Nicolas Carlos Abad, in a speech observing his country’s National Day and the ever increasing ties between the two countries.

The two countries – not too long ago – got the perfect opportunity to celebrate the ties between them when Argentina celebrated the 208 Anniversary of its May Revolution, an event held at the Harbor Club Rodney Bay.

It was on 25 May, 1810 that Argentina commemorated the establishment of the first autonomous government in Buenos Aires, which marked the beginning of a process that culminated in a formal declaration of Independence from Spain on 9 July, 1816.

Charge d’ Affaires Nicolas Carlos Abad stated that the term “revolution” was applied by the Argentine tradition to highlight the changing of their governmental system and distinguish the undisputed fact that after the May Revolution, Argentina began to forge its own destiny.

“We, the people of Argentina, regard this day as the founding act of our nation, much like the celebrations held here in Saint Lucia every 22 February,” Abad said.

According to him, the desire for freedom and independence of women and men in Argentina became a reality 208 years ago, a feat he described as commendable carried out by the people’s strength of ideas, their will and determination, which all started Buenos Aires which was a village at the time.

“Today we reflect and remember the presence of the people in the Plaza Mayor, claiming for their rights, for information, to be heard, to participate in the construction of their own destiny…

“Today is also a perfect opportunity to celebrate the ever increasing ties between the people and governments of Argentina and Saint Lucia.

“Since the establishment of our Embassy in Saint Lucia in October of 2013, we have been able to work much more effectively and constructively in bilateral, regional and multilateral affairs, intensifying our mutual working agenda and fortifying our relationship,” the Charge d’ Affaires said.

He said that most of the embassy’s work in Saint Lucia has been in the field of South-South cooperation and cultural promotion.

The Embassy, in the past year, extended its jurisdiction to Saint Kitts and Nevis and Dominica. These jurisdictions are now manned by its office in Saint Lucia.

In April of this year the Argentine Government hosted a cooperation Workshop in Barbados to connect Argentine experts with their local OECS and Barbados counterparts, with the aim of identifying potential projects of cooperation in the areas of agricultural business, Spanish teaching and small and medium sized enterprises development that are of significance for the development of countries in the region.

Three Saint Lucians attended that workshop all of whom are in Buenos Aires to finish projects for implementation, according to Charge d’ Affaires Abad.

He explained that the Argentine Embassy has promoted and continues to promote and make better known in Saint Lucia one of its stellar products, which is wine. According to Abad Argentina is the fifth wine producing country in the world and the ninth exporter.

“We hope that overtime we can continue sharing the beauty of our music, dance, cuisine, cinema and visual arts to the Saint Lucian people. We also hope to identify ways in which we can continue to cooperate and work together,” Abad said.

He said Saint Lucia will always be dear to him as it’s the land that welcomed the birth of his daughter Penelope Felicitas Abad.