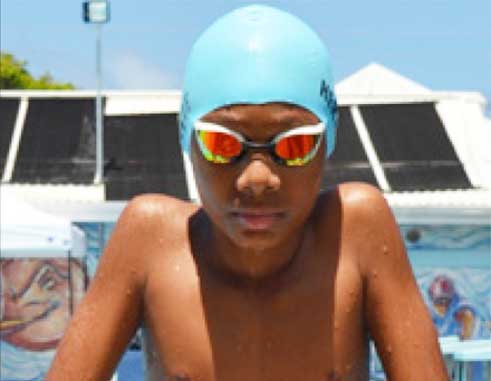 A student of the Dame PearletteLouisy Primary School, TherronHerelle is 11 years old and he is already creating waves not only at the Rodney Heights Aquatic Centre (RHAC), but further afield.

Presently Therron is under the watchful eyes of Grade 5 teacher affectionately known as Mrs Fontenard.

We met a few times at the RHAC during various championships, and most recently at the RHAC 19th championship. It was there that I decided to have a one and one chat with him. He smiled and agreed to accept my invitation for an interview.

Therron is a member of the Seajays Legends Swim Club and is being coached by Norman Banfield, Brian Charles and John Mc Lennon. He was 5 years old when his swimming career started.

As Therron unfolded his story this is what he had to say: VOICE: How did it all happen in swimming?

Therron: “I began swimming from 2012 with Cobras Swim Club and was coached by Vanessa Eugene. Later in the year I joined the Races Swim Club under the guidance of Bradford and Diane Worell and John Mc Lennon. At first I only wanted to swim for exercising purposes and to learn the basics of swimming.”

“I was later encouraged by Coach Brad to try out a few events during the RHAC Swim Meet where I won a few medals and ribbons. I enjoyed the swim meet and since then I have continued swimming competitively.”

VOICE: Who encouraged you to swim?

Therron: “Branford Worell and my family. My mom is very supportive of my swimming and is very encouraging regardless of my performance.”

VOICE: Is anyone in your family involved in swimming?

Therron: “No. None that I know of”

VOICE: What other sports have you participated in before and why did you switch?

Therron: “I have participated in track and field and football, and have represented my school in both sporting activities. I began swimming before either one and having a love for the sport there was no need for me to make the switch since this was the preferred one.”

VOICE: What has been your biggest accomplishment to date?

Therron: “Whether I am swimming with my club, on a national level, or representing my school, just being able to contribute to the teams overall performance and success is an accomplishment for me. However, in the 2016 Goodwill Games Swim Championship held in Saint Lucia I was the second place high point winner. During that year i broke some records at the RHAC, Summer Splash, Caprisun and OECS swim Meet.”

VOICE: Your favourite local and international swimmer and why?

Therron: “D’Andre Blanchard (Saint Lucian) is a committed swimmer and has a good personality and Ryan Lochte (International) an awesome Olympian and backstroker.”

VOICE: What is your favourite event and why?)

Therron: “100 metres backstroke, because it is different from the other strokes and I apply less pressure to my body. All other strokes start from a dive; however, this one starts from the water.”

VOICE: How do you prepare for a championship?

Therron: “I ensure I attend regular training sessions and get plenty of rest days leading up to the meet. I also monitor the foods I eat and try to relax as much as possible. On race days I go out and have fun.”

VOICE: How many times have you represented your club / Saint Lucia?

Therron: “I have represented Saint Lucia eight times and my club four.”

VOICE: When was the first and last time you represented Saint Lucia and how was your performance?

Therron: “I first represented Saint Lucia at the Goodwill Games in 2015 in Trinidad and Tobago. It was a very challenging swim meet; from there I knew there was a lot of work to be done. The last representation was OECS 2017 swim championship held in Saint Lucia. It was a good meet, but also a struggle for me as I was not in the best of health.”

VOICE: How many championships have you won including club/ OECS?

Therron: “I have won many championships.”

VOICE: How was your performance at the 19th edition of the RHAC swim championships and what can one expect from you in the long run?

Therron: “This was my first competition for the year and my performance was not the best due to injury. However, I intend allowing my body to heal completely and then return to give my best.”

VOICE: How far would you like to go in representing Saint Lucia in swimming (local, regional and international)?

VOICE: What do you think are the keys to your success?

VOICE: What are your favourite meal/drink?

VOICE: “What do you do during your spare time?

Therron: “I play games and socialize with my buddies.”

VOICE: Do you have a saying or a motto you live by?

Theron: “Failure will never overtake me if my determination to succeed is strong enough.”

VOICE: What words of advice or encouragement do you have to share with younger athletes?

Therron: “Don’t be disappointed by failure, continue to be the best you can be, your only limit is you.”