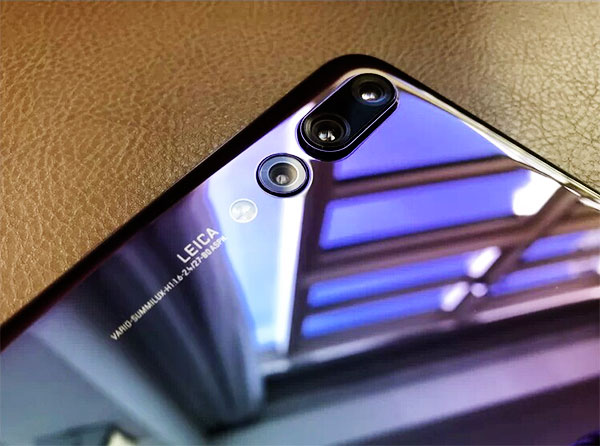 HUAWEI’S latest flagship smartphone is the P20 Pro, which has not one, not two, but three cameras on the back.

The new P20, and the larger, more feature-packed P20 Pro, launched at an event in Paris that indicated the Chinese company is looking to match rivals Apple and Samsung and elevate the third-largest smartphone manufacture’s premium efforts.

The P20 has a 5.8in FHD+ LCD while the larger P20 Pro has a 6.1in FHD+ OLED screen, both with a notch at the top similar to Apple’s iPhone X containing a 24-megapixel selfie camera. They both have a fingerprint scanner on the front but no headphone socket in the bottom.

The P20 and P20 Plus are also available in pink gold or a blue twilight gradient colour finish that resembles pearlescent paint found on some cars – a first, Huawei says, for a glass-backed smartphone.

The P20 has an improved version of Huawei’s Leica dual camera system, which pairs a traditional 12-megapixel colour camera to a 20-megapixel monochrome one, as used on the recent Mate 10 Pro.

But the P20 Pro also has a third 8-megapixel telephoto camera below the first two, producing up to a 5x hybrid zoom – which Huawei says, enables the phone to “see brighter, further, faster and with richer colour”.

“When I first heard that Huawei’s new flagship device was going to have three rear-facing cameras I was sceptical,” said Ben Wood, chief of research at CCS Insight. “But it feels like the company has added meaningful features rather than gimmicks, including the five-times telephoto zoom, excellent low light, long exposure performance and crisp black and white pictures the dedicated monochrome lens offers.”

Huawei has also improved its built-in AI system for the camera, which recognises objects and scenes, pre-selecting the best of 19 modes for the subject.

“Master AI gets you the right skills for the right modes,” said Steve Lai, senior director for marketing at Huawei. “You might have the best paint and brushes, but you can’t produce Monet’s artwork without Monet’s knowledge.”

Huawei’s AI will also help people straighten photos and zoom in or out to assist with composing group shots. The company is also pushing its new AI-powered stabilisation for both photos and videos, which Huawei says solves the problem of wobbly hands in long-exposure night shots.

The P20 and P20 Pro both have Huawei’s Kirin 970 processor, AI co-processor, 128GB of storage and 4GB or 6GB of memory respectively, but only the P20 Pro is water resistant to IP67 standards.

“One of the biggest pieces of feedback we had was that people wanted a larger battery [than last year’s P10], so we took that feedback and put in a large battery in the very slim device,” said Lai.

Huawei’s other large battery smartphone, the Mate 10 Pro, manages two days between charges, so the company has high hopes for the P20 Pro.

Both smartphones will ship with the company’s EMUI 8.1 software, based on Android Oreo 8.1, making them one of the first devices outside of Google’s Pixel 2 smartphones to do so.

“The P20 Pro is testament to Huawei’s ambition in the smartphone market, consistently improving the design, capabilities and appeal of its smartphones year on year.

“I’m certain that the current smartphone market leaders Apple and Samsung will be looking over their shoulders at Huawei as a looming threat in the high-end mobile phone market. That said, Huawei still has a long way to go with regards the awareness and reputation of its brand in western markets – to me this is the biggest competitive advantage rivals currently still have.”