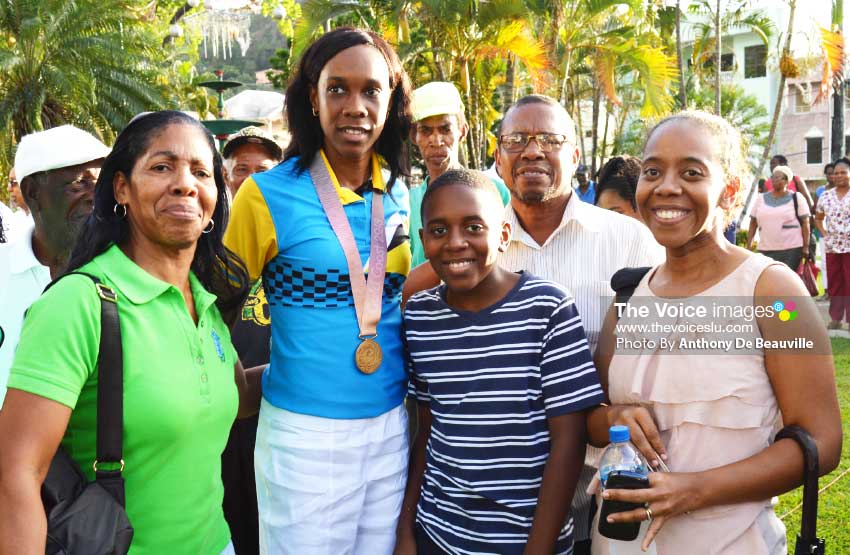 FLOW has joined the rest of Saint Lucia in praising Levern Spencer, who claimed the island’s first ever Commonwealth Games gold medal on Saturday, April 14h 2018, when she cleared 1.95m to win the women’s High Jump event.

Saturday’s competition, which also featured Saint Lucia’s JeanelleScheper in ninth place, was being conducted whilst Albert Reynolds was competing in the final of the men’s Javelin Throw, in which he was ninth.

Both events were carried live on Flow Sports 1, channel 290, where Flow Digital TV subscribers would also have been able to watch the recently concluded Flow CARIFTA Games, as well as Aviva Rugby and the ongoing English Premier League, as well as via the Flow Sports app, which can be downloaded free.

Levern has been a Flow brand ambassador for several years, and has been featured on the island’s Services Directory, billboards, and posters for a number of products and services.

First signed in 2009, when the company also first assumed sponsorship of the CARIFTA Games, she has gone on to achieve the island’s best finishes at the Commonwealth Games, Pan Am Games, World Championships, World Indoor Championships, and the Olympics.

“We remain proud of our 10-year association with Levern Spencer. She is a great athlete and also a fine ambassador for Flow, and for all of Saint Lucia.

“She is humble and diligent, and we are delighted to have played a part in helping her attain the heights to which she has soared.

“We are equally pleased that so many Saint Lucians were able to stay up and watch live, whether on Flow Sports 1 or via the Flow Sports app on their mobile phones.

“Tens of thousands of customers can now view the exploits of our sporting heroes via this new channel and smartphone app.

“Levern embodies the ideals to which Flow as a company aspires – she is world class, committed to achieving excellence in her field, and she strives to be the best, with 17 medals, 11 of them gold, in international competition since 1999.

“She has had an incredible career, with hopefully more to come. As a longtime sponsor of sports and a company that is committed to helping young talents reach their full potential, we are thrilled to help her achieve her dreams.

“We look forward to welcoming our Golden Girl.”

Immediately upon her arrival in Saint Lucia, Flow is expected to present Levern with a Galaxy S9 for her use on the island’s first, fastest and most reliable 4G LTE network.