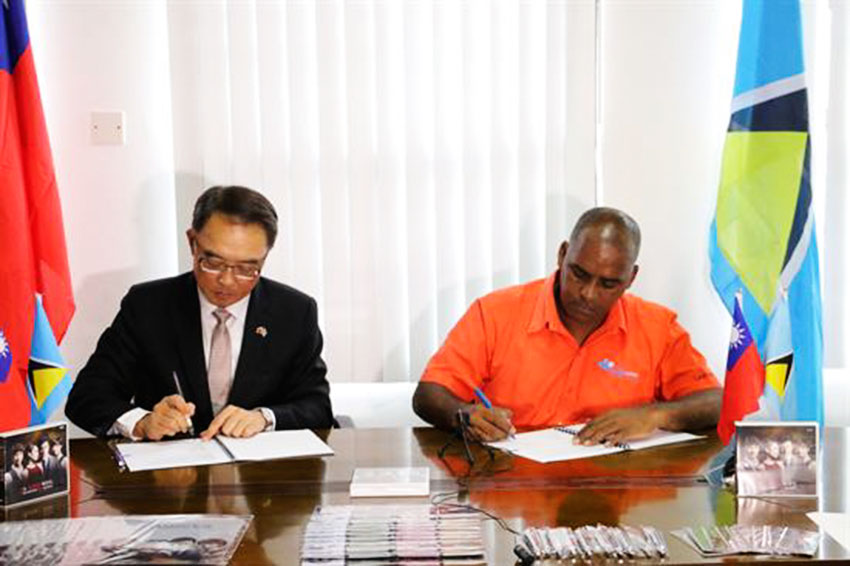 MOVE aside Young and the Restless — St. Lucia will soon be home to a Taiwanese Soap Opera named: ‘A Good Wife’. The show will air on Calabash TV from next month, at three different times on Mondays and Fridays.

Taiwanese Ambassador to St. Lucia Douglas Cheng-Tsung Shen and the Managing Director of Calabash TV Bernard Fanis signed a contract authorizing Calabash TV to broadcast ‘A Good Wife’, a show akin to a soap opera, but is properly called ‘an idol drama’.

‘A Good Wife’, also called ‘Honey I’m In Love With Someone Else’, is a “famous idol drama” from Taiwan, which was originally broadcast in Taiwan in 2013.

Speaking at the press launch, which was hosted at the Taiwanese Embassy on Tuesday March 27, the Taiwan Ambassador spoke about the “long and cordial relationship with St. Lucia’s Government that the Government of the Republic of China and Taiwan has’, after stating that this soon-to-be-aired drama series contains 26 episodes and Calabash TV will broadcast one new episode three times a week.

The Ambassador, while highlighting the many areas in which the two countries have worked together such as agriculture, information and communication technology, healthcare, education, was keen to point out that a “cultural exchange is equally important.”

Fanis pointed out that in St. Lucia “We don’t see much in terms of Taiwanese culture, in terms of the music, the arts and so on” and that the airing of this program will be an opportunity for St. Lucians to do so.

He described the airing of the Taiwanese drama series as “just the start of an exchange which will be (very) beneficial to both sides, in our case in terms of promoting our creative industry and in the case of Taiwan, giving us a better appreciation of their culture.”

Asked about the potential commercial benefits for Calabash TV in signing this deal, he replied; “Definitely! The whole point is to, of course, increase viewership, but also to give people a diverse range of viewing options.

He also promised that the station will start promoting the drama series in time for its airing next month.

Fanis said that the episodes will be dubbed in English.

He explained, “It’s almost seamless. You can’t tell that they’re not speaking English, but it’s seamless in terms of the overdubs and (they are) very engaging stories.

“It’s like (a) typical soap opera. They have all the drama, their peaks and their troughs. I mean, it’s pretty exciting.”