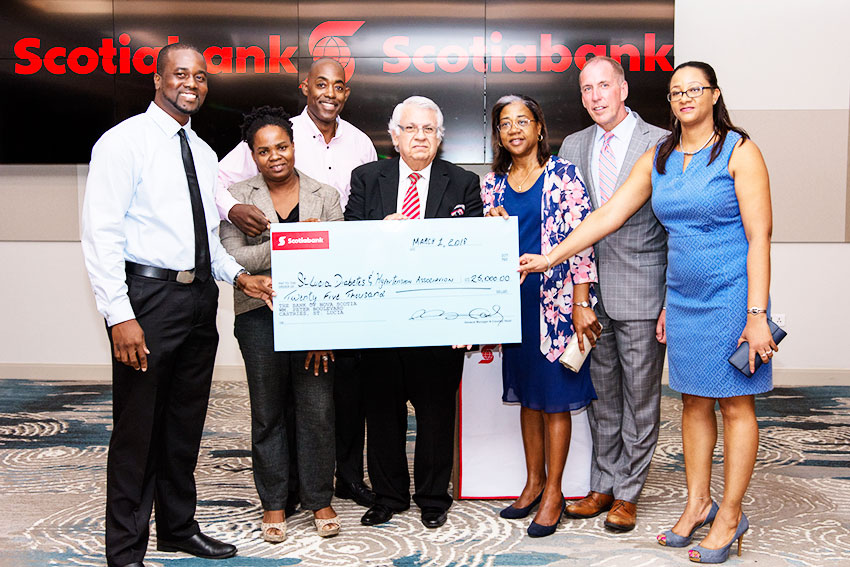 PRESS RELEASE – “TOGETHER we can save lives.” This was the promise made by Mr. ElieBendaly, Country Manager for Scotiabank St. Lucia on March 1st at a Client Cocktail Event.

Mr. Bendaly was quoting and supporting the motto of the St. Lucia Diabetes and Hypertension Association prior to making a donation to them of $25,000 to assist in the fight against diabetes – a disease which will be the seventh leading cause of death by 2030.

During his speech, he reinforced that Scotiabank stood by its service promise that everyone has the right to become better off and as part of its social responsibility efforts, the Bank was pledging its commitment by partnering with the association for three years by donating a total of $75,000.

This donation is in keeping with Scotiabank’s robust sponsorship thrust within the Caribbean by continuing to support sports, youth, education and the environment.

Mr. Bendaly also referenced The World Health Organization’s statistics which indicated that in 2015, 1.6 million deaths were directly caused by diabetes.

With the Caribbean gaining the unwelcome reputation as the amputation capital, diabetes is a disease which affects a significant portion of the populace with St. Lucia alone recording 130 amputations a year based on 2007 statistics.

The Country Manager however emphasized that it does not have to be this way. Diabetes and hypertension can be avoided if care is taken with healthy diet coupled with regular exercise.

He stressed that both individuals and corporations can play a part to support the Association.

As quoted by him from Winston Churchill, “Healthy citizens are the greatest asset any country can have.”