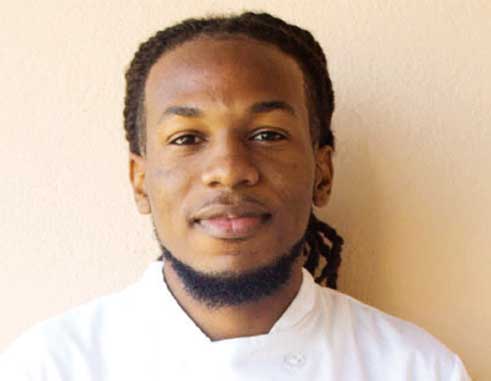 WE have heard many times from different sources that we should probably chose the vegan lifestyle over the norm as it is said to be healthier. But most of us cringe at the thought. Here’s a new initiative that will change your mind about the vegan lifestyle.

Ngugi Lucien, a young man from Bella Rosa, Gros Islet had a passion for cooking at a very young age. According to him, he would spend time experimenting with his mom’s cookbook. The end result was always what he expected but his passion did not let that discourage him. He was determined to grow and excel in that area.

Over the years, he grew in his skill, but it would take a different turn three years ago when he decided to transition from consuming meat to being a vegetarian, pescatarian and now vegan. His passion grow towards vegan cooking.

Being a health enthusiast, it was quite easy to find ways to make his new lifestyle work for him, and after realizing how difficult it was to find vegan snacks, he decided to experiment in that area leading to the birth of Grassrootz Vegan.

Grassrootz is an online based cafe specializing in healthy vegan snacks namely banana bread,vegan parfaits, muffins and all that good stuff.

Ngugi managed to take something people would assume is boring and tasteless and make it exciting, modern and appetizing.

But enough from me, RRD run into Ngugi and we just had to get the scoop on what’s popping with Grassrootz.

What ignited the spark in you to start a new business and how did the idea for your business come about?

I always had the idea of running a food establishment of some sort. I attended Trinidad and Tobago Hospitality and Tourism Institute and returned home to St. Lucia to complete 2 internship programs. After my first internship I had to wait before my second internship started and the feeling of being idle for that amount of time really scared me, so I decided that that moment was the right time to start up this venture . My sister had just went through an entire vegan pregnancy, which I assisted with by cooking for her frequently during the latter part and the idea sparked when she expressed the difficulty in finding vegan snacks. I began by solely selling banana bread and since then Grassrootz has evolved into so much more than that to include muffins, cinnamon rolls and now cheesecakes, cookies and parfaits.

Where do you see yourself and your business in 10 years?

I definitely see myself operating out of a few physical locations where customers can visit and purchase vegan meals beverages and snacks. I also see Grassrootz being involved in the community working alongside sports clubs and schools for example, providing budding athletes and students with healthy alternatives to encourage a healthy lifestyle to support their development. It’s also a dream of mine to see the business expanding beyond the borders of St. Lucia.

What motivates me is my own love for cooking, as well as the customers I serve who are very forthcoming with feedback. Some are appreciative of an operation like ours because it makes an alternative diet easy to continue, some also provide constructive criticism for what would improve their own personal experience with us, both drive us to continue what we have been doing and to also work to improve as we go along.

What three pieces of advice would you give to someone who wants to become an entrepreneur?

1. Always put your best foot forward. Focus less on making a quick dollar, but rather focus on building up your brand. At the end of the day your end product is a direct reflection of you and your company, make it one which creates a positive lasting impression on your customer.
2. Prioritize. It is difficult trying to run a business, even a small operation such as ours, but the ability to prioritize makes a world of difference. Setting aside more trivial things and keeping focused on your goals can make the difference between overall success and failure.
3. Never stop educating yourself. This doesn’t necessarily mean education within a school setting, but as an entrepreneur you should always be working on your craft, making yourself aware of things related to your field and otherwise. There is no harm learning more than what is necessary, but knowing too little can cause many avoidable setbacks.

What have been some of your failures, and what have you learned from them?

I’ve had many failures which are mostly centered around lack of proper preparation, and they have all reinforced the importance of preparation for me, from very small tasks right up to the large ones.

What is your greatest fear, and how do you manage fear?

My greatest fear is not being able to accomplish what I have envisioned for myself, for whatever reason that may be. I manage that fear by making a conscious decision to remain positive and to just trust in the process. I use my fear to fuel something more positive.

Who has been your greatest inspiration?

It would be hard for me to choose just one person who inspires me because so many people inspire me in different ways. To name a few I’d say my parents have inspired me, some of my former classmates who have gone on to run businesses of their own such as JohananDujon (Algas Organics), Darren Antoine (Island pops) and so many others. Marcus Garvey has also always been a role model of mine.

What has been your most satisfying moment in business?

My most satisfying moment in business was my very first week of operation, when the reception I got from a simple social media ad I created on my cell phone and posted on social media got such a great reception, far greater than I imagined possible at the time. A lot of these people became recurring customers overtime and that just provided the reassurance I needed to continue striving.

In one word, characterize your life as an entrepreneur.

Enlightening. (Haha, there was so much to learn in the practical sense)

What are your hobbies? What do you do in your non-work time?

I enjoy reading, because I believe that there is so much literature out there which not only makes me more knowledgeable on several topics but is also entertaining as well. I also love watching movies and series. I enjoy watching just about anything, from psychological thrillers, to comedies or even documentaries. I also enjoy nature, things such as going to the beach, going on hikes and to waterfalls are things that I am really into.

Now maybe you haven’t decided to give vegan food a try, but after this feature, I am definitely tempted to try and I’m sure you are to. Today I leave you with this quote; People always follow the crowd. Be brave, Dare to do something different. Let the crowd follow you.