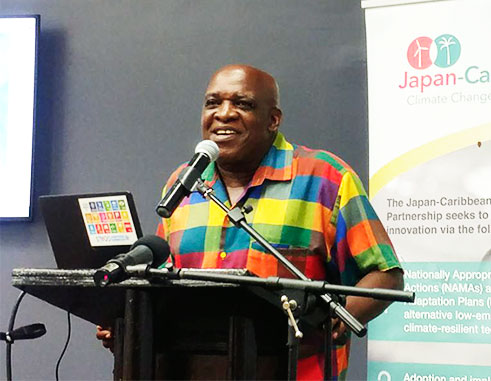 A.C.T. is an acronym for “Adapt, Change behaviour, Take action” and the campaign calls on citizens to take personal responsibility for reducing the vulnerability of their families and communities to the impacts of climate change, by taking prescribed actions.

It advocates the urgent need to undergird climate change adaptation efforts with a culture of good governance at the individual, household and community levels.

The design of the campaign was informed by the findings of a UNDP commissioned national baseline survey to determine knowledge, attitudes and practices relating to climate change.

The survey cited poor waste management practices as a perceived compounding factor to some climate change impacts experienced during hurricanes, storms and droughts.

UNDP’s Deputy Resident Representative for Barbados and the OECS, ChisaMikami, has added her voice to the call, urging the media to play its part in transmitting information so that there could be a transfer of climate change-related knowledge with the ultimate aim of behaviour change.

Deputy Chief Sustainable Development and Environment Officer, Mrs. Dawn Pierre-Nathoniel, explained that the aim of public awareness is to encourage behaviours that help in building climate resilience at the individual, household, enterprise, community, sectoral and national level, facilitating the success and viability of current and future investments in the country.

She added that consistent with the United Nations Framework Convention on Climate Change (UNFCCC) and the Paris Agreement, developed countries are required to support developing countries with adaptation and mitigation through financing, technology and capacity building.

“However, we have a responsibility to carry out the planning, policy and process reforms and the ongoing public sensitization, so that our citizens, communities and our country are better prepared and able to recover, post extreme weather event”, she concluded.

An important feature of the A.C.T Now Saint Lucia campaign is a strong participatory approach with influential groups such as schools and the calypso fraternity.

A major tool coming from this approach is a calypso penned by veteran songwriter Nahum Jn Baptiste and delivered by A-listers from the calypso fraternity, namely Calypso Monarch, the Mighty Pep, De Educator, T.C. Brown, Minelle, Chocolate and Ready.

Coming out of the partnership with the calypso fraternity is a Lucian song and music video that are expected to resonate well with the national audience.

The calypso was mixed and mastered by Francis “Leebo” De Lima and is therefore De Lima’s very final musical project before losing his 18-month fight with gastric cancer.

In addition, the Ministry of Education supported an alignment for the campaign with the Annual Schools Science Fair. The outcome is the participation of primary school children island-wide through a competitive challenge which will conclude in early May.

Over the coming weeks, the A.C.T Saint Lucia campaign will command high visibility across popular electronic and online media platforms.