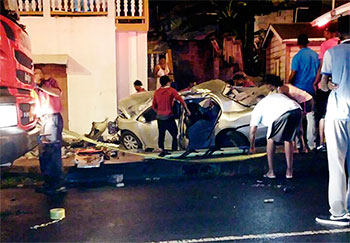 LESS than one month into 2018 and we are again confronted by the sad spectre of road accidents claiming young, promising lives. The accounts of last year’s road accidents — and of years gone by — seem to suggest that there is a pattern of poor judgement, road rage, indiscriminate racing, poor timing and inconsiderate decisions behind those incidents, resulting in often deadly consequences. Surprisingly, precious little seems to be learned from the fate of those who have gone before.

Cutting out excess speeding, impatience, texting and driving, discourteous behaviour and a stunning level of disregard for the traffic laws of Saint Lucia on the part of some drivers, old and young, will go a long way to reducing the occurrence man-made disasters on our roads.

As a people, we need to place a higher premium on human life in all respects. The loss of people in the prime of their productive years takes an expensive toll on the country in both human and economic currency. Young people are the energy, vitality, hope and future of the nation. The impact of the emotional pain wrought on family and friends of people who either die or are maimed in road accidents is both horrific and dislodging for them.

Also linked to road accidents is the rising number of disabled youth and long-term dependency on families during recuperation and rehabilitation, if this is even possible. In many cases, road accident survivors were never able to resume the normalcy of their daily lives and are weighed downed with constant medical expenses, though now unfit to work.

Meantime, the health care system is straining to cope with increasing demands on its services. Factor in that successive governments have had difficulty (apparently) getting a national health insurance mechanism established for all citizens to ably meet health care costs. Indeed, all these observations do not add up to an environment where people can afford to take unnecessary risks. Moreover, it is plain counter-intuitive to behave in a manner that will hurt oneself or others. The many road accidents also escalate the cost of insurance coverage on vehicles.

Really, there is nothing to be gained in neglecting to drive without due care and attention on this tiny island that we can navigate from one end to the next, all in a few hours. Drivers and passengers alike should bear in mind the old adage “better late than never”. So don’t be late (die) because you’re late. If it happens that you’re late, an apology or rescheduling ought to fix things.

It is truly high time for new drivers, in particular, to stop driving to show-off and to start driving responsibly. One would think that safety measures are freshly ingrained in their minds at the very least. Drive for the purposes of transportation and remain focussed behind the wheel. Simply put, drive to stay alive and save lives. Stop with the “Fast and Furious” mindset; this is making believe. Drag racing has its attendant risks and should be left to seasoned, professional drivers and even they must be very careful. If one just got his/her driver’s license, it is better to comply with the law and drive safely at all times.

A car, no matter its capacity for speed, is still a machine subjected to the laws of physics, manufacturing limitations and warnings for safety adherence. It must be noted that the vehicles we import here do not always cater for the topography of the island inclusive of the sharp bends, twists and turns in the design of roadways in Saint Lucia. Some of those vehicles do not come outfitted with the features or built-in capacity for the stunts some drivers want to perform on the road.

Finally, let us not forget that drivers need to afford themselves reaction time. High speeds do not allow that. All these factors outlined in this article, along with compliance with traffic rules and regulations, will inevitably lead to safer roads and reduce the meaningless loss of irreplaceable lives.