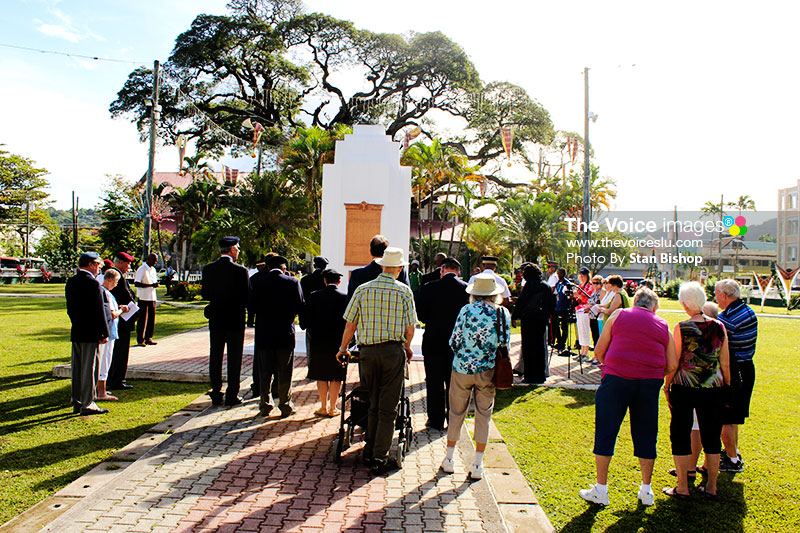 While here, the visiting team, numbering around a dozen, was taken on a tour of various sites around the island. The first stop was Derek Walcott Square, where wreaths were laid at the Cenotaph in tribute to soldiers who died in combat World War II (1939-1945).

The short ceremony began with the national anthem of Saint Lucia, followed by a moment of silence and welcome remarks by President of the St. Lucia Ex-Service Legion, Haynes Cyril, who served in World War II as part of the Commonwealth’s response to Germany’s threat to world peace.

Bidding prayers were then recited, followed by the Lord’s Prayer and the reading of the Act of Remembrance, the latter of which reads: “They shall grow not old, as we that are left grow old. Age shall not weary them, nor the years condemn. At the going down of the sun and in the morning, we will remember them.”

Castries Mayor, Peterson Francis, joined Legion Dominion President, Dave Flannigan of Canada, and Cyril in laying wreaths at the base of the Cenotaph as a bugler from the Royal St. Lucia Police Band played the last post and reveille, during which prayers were said.

Members of the visiting delegation, along with their relatives, were then accompanied to Soufriere to visit the Sulphur Springs and to pay tribute at the Du Boulay Shrine located in the Botanical Gardens there in memory of Desmond Du Boulay, a Saint Lucian who served in the Royal Canadian Air Force as a pilot officer and was shot down in Germany in 1943.

Following a lunch break at the Old Sugar Mill in Soufriere, the delegation returned to Castries and paid a courtesy call on the Mayor of Castries before leaving for the War Graves at Choc Cemetery.