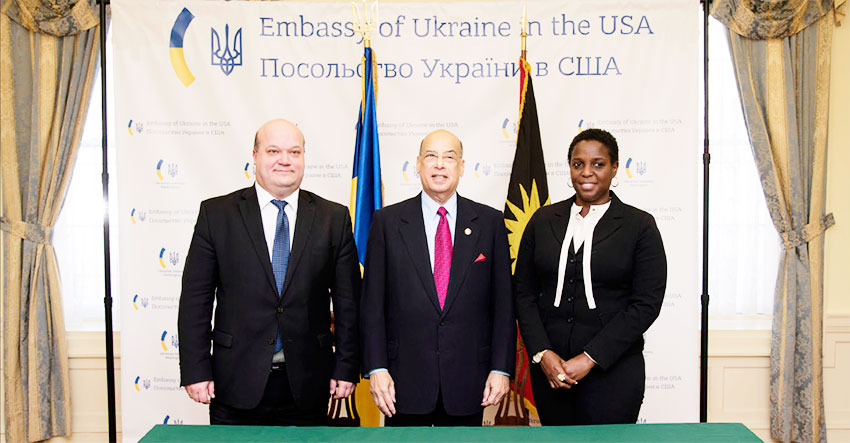 The agreement was signed at the Ukrainian Embassy in Washington by Antigua and Barbuda’s Ambassador to the United States of America, Sir Ronald Sanders, and his counterpart Ukrainian Ambassador, Valeriy Chaly, after several months of negotiation.

Under the terms of the agreement, holders of Antigua and Barbudan and Ukrainian passports will be able to enter each other’s countries on holiday or to conduct business without the need for visas.

Ambassador Sanders said: “While the Agreement has been signed today, there will be a lapse of 30 days before it becomes effective, in order to allow immigration officials in both countries to institute the arrangement.”

The Ambassador added that “other agencies, such as Embassies in other countries, airlines and cruise ships will also have to be informed to facilitate the ease of travel envisaged by the abolition of visa requirements.”

Commenting on the importance of visa-free travel with Ukraine, Sir Ronald pointed out that “Ukraine is the second largest country in Europe after Russia and has the seventh largest population at 45 million people. Therefore, there is a huge potential for Antigua and Barbuda to attract tourists and to explore investment.”

The Ambassador explained that: “There are already chartered flights from Ukraine to Caribbean destinations, particularly the Dominican Republic. With the necessary marketing and promotion, including links to travel agents and tour operators, Antigua and Barbuda could benefit from a share of the Ukraine tourist market.”

The widest possible visa-free travel for holders of Antigua and Barbuda passport holders is a goal of the country’s Prime Minister Gaston Browne and his government.

“Visa-free travel to 136 countries enhances the value and standing of the Antigua and Barbuda passport,” Sir Ronald said, adding “that is why we vet applicants for our citizenship and passports so diligently and carefully. Visa free travel enhances economic opportunities for the country.”