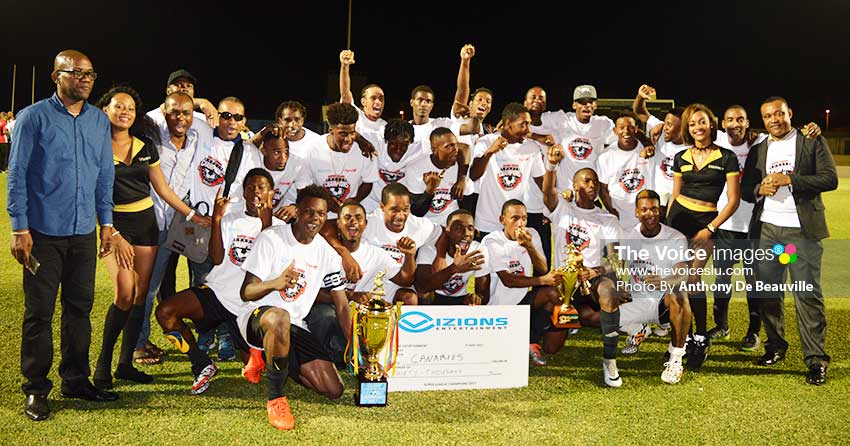 July: School Sports — Leon Hess Comprehensive Secondary School emerged Champions of the Department of Youth Development and Sports 2017 Secondary Schools 40 over aside Under-15 Cricket Tournament. They defeated Babonneau Secondary by 87 runs in the finals. Scores in the Match: LHCSS 246 for 6, with Keygan Arnold (captain) top scoring with a magnificent 125. In reply, Babonneau were bowled out for 153.

The Windward Islands Under-19 selectors named Saint Lucian Johnnel Eugene as captain of the sub-regional team to participate in the CWI Under-19 tournament. The other Saint Lucians on the squad were Wayne Edward and Kimani Melius. Craig Elisee was named on the reserve list.

Also in July, Courts Jets continued their good run on form to win their 5th consecutive National League Basketball Championship title with a convincing 87-64 margin over rivals VBCC Warlords. The onslaught was led by co-finals Most Valuable Player Andre Louison with 25 points, 11 rebounds and 4 steals.

August: The Saint Lucia national swim team captured 21 medals, including 6 gold, 8 silver and 7 bronze, to finish in fifth place with 314.5 points at the 23rd Goodwill Swim Championship in Guyana. The 26-member team competed against swimmers from the Bahamas, Grenada, Barbados, Trinidad and Tobago, Suriname and Guyana during the 3-day meet.

Match top scorer was Alicia Ogoms with 13 points, followed by Alissa Coulter with 11 for the Canadian team.

In the third set, Saint Lucia put on more of a challenge early on, and even kept up with Canada to tie at five, but Canada quickly regrouped to keep the Caribbean side in check.

October: Vieux Fort South senior football men team retained their Blackheart Knockout Football championship trophy with a 3-0 win over Canaries. The goal scorers for VFS were Antonius Myers, Antonio Joseph and Noah Nicholas. For their victory, they collected $30,000, the Flow trophy and goal medals. In the third place playoff, Gros Islet easily got past Marchand 4-2, and their prolific striker Troy Greenidge was on target as he scored a hat trick, while Daniel Dannis scored the other. For Marchand, the goal scorers were Andrus Remy and Brandon Eugene.

In the KFC Commercial Tournament, Goddard/PCD emerged champions by 84-72 to win their third consecutive title. This time around they played Financial Services All Stars. CSA defeated Saint Lucia Fire Services 68-66 for the third place silverware.

November: Central Castries emerged champions of the Saint Lucia National Cricket Association Division 1 Two-Day Competition played at the Daren Sammy Cricket Ground. Scores in the match: South Castries 159 in 34 overs and 145 for 7 declared in their second innings and Central Castries 160 runs in 40 overs. Chasing 145 for victory, Central Castries ended on 94 for 2 off 23.3 overs before rain brought the proceedings to a halt in the final hour of the day. Result: Central Castries won by virtue of their first innings margin (1 run).

The Rodney Heights Aquatic Centre came from November 10-12 staged the 27th edition of the OECS Swim Championship. With 122 events over three days of intense competition, host Saint Lucia emerged 2nd place at the end. The rival islands of Grenada, Antigua and Barbuda, and Saint Vincent and the Grenadines were all set to take the trophy home. However, only one island was able to dominate the combined scores. In first place was Grenada with a combined score of 1360 points. Saint Lucia fell short by 16 points, coming in 2nd place with combined scores of 1344. Antigua and Barbuda National Team was in 3rd place with 1240.50 points, while Saint Vincent and the Grenadines placed 4th with 807.50 points.

At the end of day three, the total medal count for Team Saint Lucia was 38 gold, 32 silver and 28 bronze.

Junior female Swimmer of the Year Katie Kaye was a proud recipient of a FINA scholarship. In line with the FINA policy on Development and Universality, FINA has implemented programmes in order to help the progress of aquatics in the five continents. FINA has thus selected Kyle and approved the allocation of funding in order to support her training and development. The aim of the programme is to identify quality and prepare a limited number of athletes aspiring for Olympic Games. Kyle is currently attending college in the United Kingdom and has her eye set on the Tokyo, Japan 2020 Olympic Games.

Coconut Bay Beach Resorts and Spa Football team — C Bay Hard Nuts — completed a second consecutive year of dominance in the Saint Lucia Hotel and Tourism Association football tournament as they defeated rivals St. James Morgan Bay 5-1 to win the championships convincingly. The goal scorers for the victorious team were Deland Neptune and Adrian Henry with two goals each with the other coming from the boots of Michael Descartes.

The wheels of preparation for the staging of the annual National Sports Awards continued turning when officials from the Department of Youth Development and Sports met with the leadership of National Sports Associations at the department’s conference room on Micoud Street. The meeting was chaired by Senior Sports Officer, Patrick Mathurin, who will be heading the National Sports Awards Organizing Committee.

Mathurin reviewed last year’s awards and spoke of plans for the staging of the 38th edition of the event.

“Generally, the event last year was an improvement over previous years, and we are looking forward to making it even better this year,” he commented.

In outlining plans for the upcoming awards, Mathurin spoke on issues pertaining to the date, venue, awards categories, the deadline for the submission of nominees, invitations, a proposed new format for the awards, and information pertaining to the nomination forms.

The Annual National Sports Awards will be held on February 17, 2018.

In the Gros Islet Football League, GMC United created history as they captured the ‘Spider Cup’ for the first time with a 2-1 win over Sports/Locker Northern United. The goal scorer for GMC United was Rohan Lambert.

The curtains came down on the Corporate Warfare Commercial League Tournament with the staging of the Third Place Playoff and Grand Finals. For the third place silverware, WASCO defeated Sandals 4–1 with goals from Ahmed Chandler in the 8th and 22nd minutes, Dylan Sonson in the 33rd and Richard Annius in the 39th. Sandals scored one in the 38th minute via the boots of Dwain Wilson.

In the finals, Goddard/PCD had the better of Windjammer by 4-2. Goddard/PCD nosed ahead in the first minute with a goal by Javier Charlouis. Tyson Fedee equalized for Windjammer in the 10th minute. However, the night belonged to Charlouis who went on to complete his hat trick in the 19th and 22nd minutes. Ed Joseph scored one for Windjammer in the 35th minute. Meanwhile, at a brief prize-giving ceremony, Goddard /PCD collected the championship trophy, gold medals and $3000, while Windjammer had to settle for the runners-up prize of $1500, and WASCO for their effort walked away with $1000.

The Saint Lucia National Boxing team tied with Trinidad and Tobago in fourth place with 25 points at the recently-held Caribbean Developmental Boxing Championship that took place at the Beausejour Indoor Practice Facility. Grenada was crowned champions as they dominated most of the categories to seal their first Caribbean title. Grenada won 18 medals (30 points), followed closely by Barbados in second (28 points), and defending champions Guyana finished third (26 points).

The Saint Lucia Football Association recently held their Grass Roots Programme targeting further development of female football on the island. Over 30 football coaches from the association’s 19 affiliates took part in the training exercise to equip themselves with the much- needed tools to deal with young ladies desirous of further developing their football skills. The three-day event which got underway at the SLFA headquarters in La Clery was facilitated by CONCACAF representative Stephanie Gabbert of Denver, USA.

The top eight for the knockout stage in the Plate Draw will see VSADC versus Behind the College All Stars, Marchand Veterans against Caricom Masters, on January 13th 2018 Laborie Veterans versus Labowi Connextions and Vieux Fort North against Flow Lancers FC on January 14th.

Big Players FC out of Marchand went on to win the inaugural Mayor’s Cup over VSADC by 1-0, a goal scored by Lincoln Phillip in the 22nd minute.