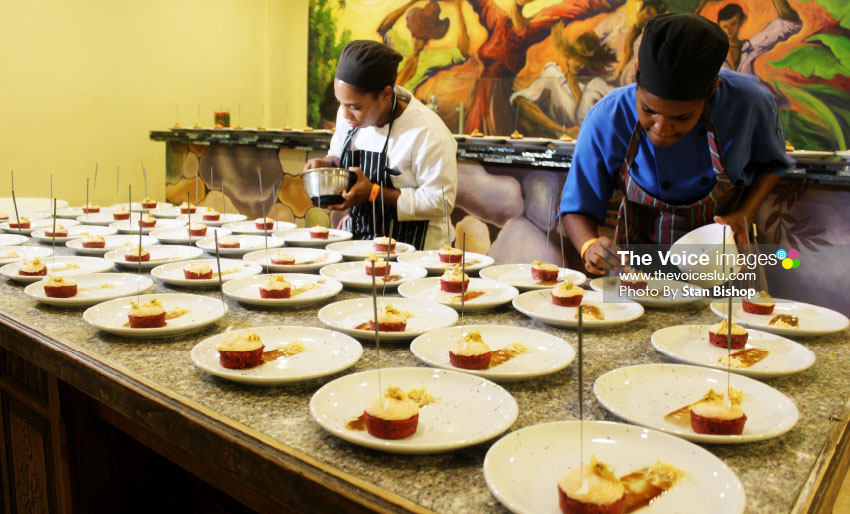 THE positive feedback from the recently-held Food & Rum Festival seems to be so overwhelming that more fanatic foodies from around the world will soon put Saint Lucia on their travel itinerary.

The three-day festival which ended on Sunday at Pigeon Island National Landmark with the aptly-titled Main Course featured a number of restaurants, hotels and other private interests vending a wide range of delectable food and drinks. To cap it all off, Eighties R&B crooner Freddie Jackson and Saint Lucia’s very own Teddyson John were part of the dessert.

The festival officially began last Friday at Anse La Raye Fish Friday where Burning Flames headlined a lineup that included Herb Black, Mac 11 and Ezra. Herb Black, an Anse la Raye native, told The VOICE that the huge crowd turnout for the event is what residents look forward to eke out their survival.

“We’ve already been labelled as one of the poorest communities in Saint Lucia,” the former Calypso Monarch said. “For most of our people, this is how we do our little hustle to send our kids to school. So every time we have an occasion like this, it’s always good for our people.”

The food and rum menu continued on Saturday evening at Coco Palm Resort where international chef, Marcus Samuelsson, teamed up with the local culinary team preparing for competition in this year’s Taste of the Caribbean competition in Miami to create a five-star meal fashioned after the Obama State Dinner.

Kylee Philip, who has been working at TiBananne at Coco Palm for three years now, said the experience she gained from working with Chef Samuelsson last Saturday was nothing less than inspiring.

“It was a wonderful experience for me in terms of being able to work with Chef Marcus Samuelsson and his team towards making this night for everybody who dined with us,” she told The VOICE. “Everything went as planned. The food was amazing and the feedback from the guests was positive.”

Germain Sydney, a bartender at The Body Holiday Le Sport, also had similar sentiments about the top chef and the festival: “When I heard that guy was going to be here, it gave me goosebumps. It makes people like me and my teammates proud to know that a guy of that stature would come down here to be part of this.

“Marcus is a good, down-to-earth and friendly guy. I’ve never met a guy like that. He acts as if he knows you. He’s a fantastic guy.”

“I’ve also met the guys from Caribbean Journal, who have been fantastic. I tasted rums that I’d never tasted before and learned things I’d never known before.”

Probably buoyed by Samuelsson’s inspiration the day before, Sydney outclassed four other bartenders to win the Chairman’s Reserve cocktail competition. Aside from his $2000 prize, his cocktail also becomes the official cocktail.

Charmaine Joseph, Public Relations Officer, Saint Lucia Tourism Authority, said those are the kinds of sentiments the SLTA feels proud about after many people were iffy about the festival when it was first announced.

“It has been an enriching experience for our young chefs; it’s a once-in-a-lifetime opportunity for them,” she told The VOICE. “We’re really happy especially because of the training that has happened and the experiences that our young chefs and bartenders have received.”

Samuelsson’s impression on the team he worked with seemed to have created a bright spark, especially with many of those who helped him prep the Celebrity Chef Dinner telling The VOICE that working with him was among the best highlights of their careers. The team included Chefs Robbie Skeete and Richardson Skinner, as well as several members of the national culinary team. Joseph said that kind of feedback is what organizers always hope for.

“This is one of the most important factors for us. It wasn’t only for providing entertainment or for experiences for the public. Whatever we do – whether it’s the Saint Lucia Jazz Festival or the Food & Rum Festival – it must be a learning experience for our young people so that we can develop their skills and talents as a result of this international exposure. This would result in creating better chefs, bartenders, musicians – whatever the case may be. But we’re aiming to strengthen the capacity of our people,” she explained.

Joseph said that the SLTA was “encouraged and happy” by the participation of the public, adding that based on the reviews the SLTA has received, “everybody seems really satisfied and happy with what they have seen, eaten and experienced. Anse la Raye was a humungous success – it was sold out. So, too, was the Celebrity Chef Dinner.”

She said this year was a proof of concept event and that organizers had a clear vision of what they wanted the festival to be.

“The festival was really designed not only to expose people to celebrity chefs like Marcus Samuelsson, but also at different levels of society and different areas across Saint Lucia,” Joseph said. “Hopefully, next year we’ll bring it into more communities so that everybody would be able to experience the festival and have these great culinary experiences.”

On rendering assistance to Anse la Raye Fish Friday, she said: “From a professional development aspect of the culinary skills of the vendors, we brought in executive chefs from surrounding hotels, such as Capella, to help them make rum-inspired sauces for their fish.

Joseph said the festival offered the opportunity to showcase village tourism to in its truest form and is part of what the SLTA is looking forward to in terms of developing the tourism product. She said communities like Anse la Raye can take things to the next level and enhance the visitor experience as well as their skill capacity.

Responding to criticisms about the festival being held too early in the year, she said: “It’s an opportune time of year (to host the festival) because this is the peak of the winter season,” she said. “High-profile visitors, who generally have homes in the Caribbean, often come to the Caribbean at this time of the year. These are the type of visitors that we are trying to attract – people with larger incomes who have the ability to go to five-course dinners.”

Prime Minister Allen Chastanet, who attended the Celebrity Chef Dinner and the Main Course, said he was happy that the SLTA and Events Company of Saint Lucia put the festival back on the island’s tourism calendar.

“I think that as a tourism destination, one of the most important components, other than the incredible people, really is about food,” Chastanet said on Saturday evening. “I am personally very happy to see this event back and I’m hoping that part of this event is the continual training of our incredible chefs.

“We have a great culinary team that participates at the food competition in the CHTA. But, more importantly, the goal that we have is that we’re looking to twin with some incredible institutions to make sure that when you go to a rum shop, that you get great food.

Sunday’s concert at Pigeon Island was also well-attended as the other days’ events, with many patrons sampling some eats and drinks and taking in some great music offered by the artiste line-up.