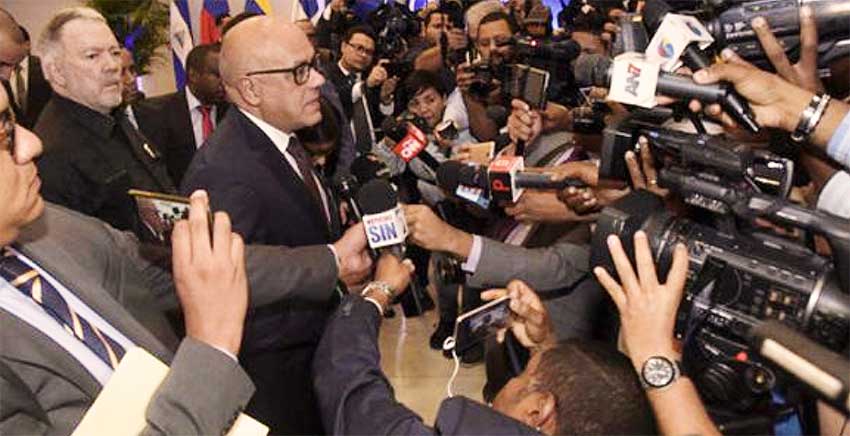 PRESS RELEASE – The Bolivarian Government reiterated its commitment to the national dialogue as the only way to consolidate peace in Venezuela, said the Minister of People’s Power for Communication and Information, Jorge Rodriguez, on Thursday.

“We insist on dialogue. We are here with the best of expectations, open-hearted, to achieve an agreement of peaceful coexistence that involves, in a definitive way, the eradication of violence from the political life in Venezuela,” said Rodriguez, upon his arrival in the Dominican Republic, where he develops a new meeting with representatives of the opposition.

Rodriguez, who is also head of the delegation by the Bolivarian Government, repudiated the recent pretensions of resuming the violent actions in the country by the extremist sectors of the opposition, such as the Voluntad Popular and Primero Justicia parties.

“We have received information, not only from Venezuelan intelligence agencies, about the regrouping of groups and violent factors, led by some of the most violent parties that make political life in Venezuela. But there are also public and notorious statements that have been mad by some representatives of parties such as Voluntad Popular and Primero Justicia, which are pointing to return to the file on violence,” denounced Rodriguez.

In this regard, he said that these statements are part of a set of actions promoted by the violent sectors of the opposition in order to hinder the process of national dialogue, because great advances have been made in the previous meetings.

The delegations of the National Government and the opposition will resume on Thursday the meeting on political dialogue, an event that takes place at the Convention Center of the Foreign Ministry in Santo Domingo, Dominican Republic.

This meeting will take place without the presence of the Chancellors of Chile, Heraldo Muñoz; of Paraguay, EladioLoizaga; of Mexico, Luis Videgaray; of Bolivia, Fernando Huanacuni; and of Nicaragua, Denis Moncada, who serve as companions. Last Friday, these conversations resumed with the incorporation of these international companions. Source: RNV