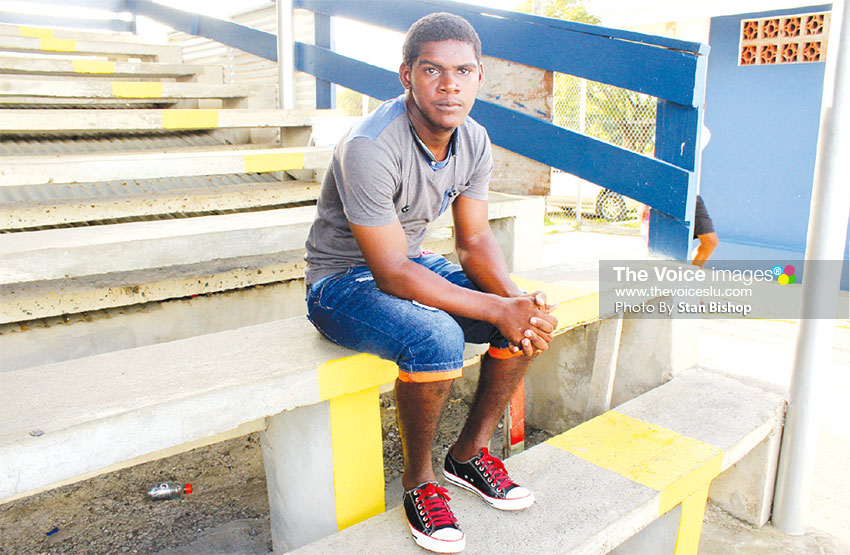 THE late American actress Bette Davis (1908-1989) is quoted as saying that, “The key to life is accepting challenges. Once someone stops doing this, he’s dead.” Eighteen-year-old Chance Paul, of Dennery, knows that all too well, as overcoming the odds has been the story of his humble and inspiring life.

Diagnosed with cerebral palsy, Chance said life for him was not good at the beginning. While he said he was blessed with two loving and supporting parents, he was often being bullied at school. Chance said he entered Dennery Infant School late – at age 7 — because he said he started walking at age five.

“I was always smart at school,” he said. “When the teacher asked a question, I was always the first person to raise my hand and my answer was always right.”

He said he stayed in primary school for about a year and a half until things got really bad. People kept on bullying him and calling him “old names”, which he did not find funny. He said that even though he had hope in the teachers and the principal quelling the matter, the support was lacking.

“When I went to them, they were always telling me to come back and see them,” Chance tells me. “They were not willing to help me. If they had helped me, I wouldn’t have left school. But I had to back out because I was getting threats. If I didn’t leave, it would have been another story.”

He recalled the fateful day that led to him quitting school: “I was coming from school and two guys started beating me all the way; just beating me with a whip and kicking me in a gutter. From that day, I went home and never went back to school.”

But Chance, who sounds more like a philosopher than a child who would simply blame the blunders of the world on others, said he still harbours some degree of regret for quitting school, despite the abuse he received from the other children.

After spending about four years at home and in the streets because he did not see a bright future for himself, Chance said he took a chance for the better by attending the Dennery Child Development Centre, a place for people with CP. The principal told him she wanted him to be part of the programe and he obliged.

“From that time, I know there was not a mistake in me going there because my self-esteem was going back up,” he said of that experience. “I was seeing that that was the chance I wanted. I spent about three years there.”

In 2014, Chance went to CARE (Centre for Adolescent Renewal and Education) in Odsan and then his future really began to look brighter for him. He said he was part of a programme which taught him to read and write and keep him on the right track. According to him, it was more like going back to infant school. He also did a mechanics course for two years. But there were a few challenges along that journey.

“At first, I thought I wasn’t catching up with the class, but I was catching up,” he said. “I’m a slow learner. If you teach me something, I will take some time to register it in my mind. That’s the way I am: I have to think about the thing many times. But in July this year, I graduated.”

As part of his learning programme, Chance said he was sent to Flow’s central garage at Corinth where he spent eight weeks. He said he exhibited a high level of discipline during his internship there, including showing up for duties — and completing tasks — on time. It turns out that Chance’s chances were about to get better after all. Then came the day when he said one of the best moments of his life came to pass.

He explained the moment: “On graduation day, I thought I was just going to get a certificate and walk out. Then they started giving out awards and I started thinking, ‘You think Chance will get an award?’ After a while, I heard them call my name for an award and I was surprised. I got one award for completing my work. I also got an award for male student of the year. I was so shocked that I didn’t know what to do. I mean, there were other students who were topping my class. I thought they were going to get awards; they didn’t get any, and it was me that was the star boy.”

With his skills in auto mechanics, Chance said he is now focused on gaining meaningful employment. But, just like the predominant story of his life, he knows he has to work doubly hard in realizing that dream.

Around the world, nearly 17 million people live with a condition known as cerebral palsy, or CP, which is the result of brain injury or brain malformation. Many people with cerebral palsy are born with it while others acquire it later in life.

Considered a neurological disorder, cerebral palsy primarily affects body movement and muscle coordination. As such, people with the condition find it difficult to control muscle movement and it is not uncommon to see them in painful, awkward positions as a result of muscles and limbs stiffening. Other conditions associated with cerebral palsy include problems with vision and internal organs. Chance, however, do not have many of these symptoms and he is also verbal and intends to use his voice to champion the cause of those who have cerebral palsy and cannot speak up for themselves.

“I’m a very slow learner. So if a person brings a vehicle to fix and says they want it in an hour, I will be able to do the job well, just not in an hour. Before going to CARE, I used to just see vehicles driving and not understanding how they worked. After going to CARE, I began to understand the mechanics by watching a vehicle and understanding how an engine can take you from point A to point B,” said Chance.

The way chance sees it, there are some mistakes that one can turn into a blessing in the end. By going back to school and believing in himself, he now feels empowered enough to empower others facing struggles similar to his. In fact, he also has other passions he wants to take a chance at.

“I also want to be a writer because I want to let people know that the mistake I made other children should not make it. Even if you’re getting bullied at school, continue to stay in school. Take the struggles and continue. Don’t allow people to put you down,” Chance advised.

Chance said he has received much assistance, love and support from the Cerebral Palsy Association. In fact, it was at their annual Christmas party held recently where Chance and this reporter were introduced. Members describe him as an inspiration and lauded his courageous and positive spirit.

“They’ve been very good to me. I have received sponsorship from them to attend CARE. So because of them, I was able to finish (my studies) at CARE,” he said.

Chance also expressed thanks to his parents, family, teachers at CARE, Dennery Child Development Centre and others for helping him along his journey to be the best example he can possibly be for other young people, especially those with CP. He also had some words of advice for others who have CP.

“I just want to tell them that their future is up to them – not other people. Do not mind people – go forward. Step up and be the person you want to be,” he said.