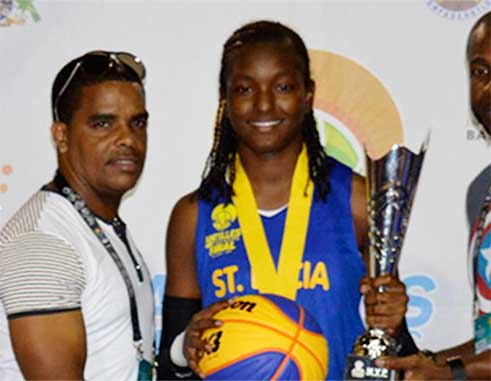 TO kick off the 2017 calendar of events, the Saint Lucia Basketball Federation (SLBF) hosted the inaugural IBF Antilles 3×3 Youth Finals. This event took place at the Vigie Sports Complex on February 25 and 26. That same weekend, the CBC General Assembly was conducted in Saint Lucia.

Leslie Collymore, President of the SLBF, gave the official welcome on behalf of the host federation. He thanked the CBC for the privilege of hosting the AGM and the inaugural 3×3 Antilles Youth Competition. He specifically thanked Patrick Haynes, Florian Wanniger and the IBF for the opportunity for Saint Lucia to host the first such competition. Collymore welcomed all delegates to Saint Lucia and hoped all would have an enjoyable stay.

Minister of Sports, Edmund Estephane, brought greetings from the Government and people of Saint Lucia on the 38th anniversary of their independence. He wished all a wonderful stay and a productive meeting, and expressed his appreciation to FIBA and CBC for having the confidence in Saint Lucia to host the meeting and 3×3 competition.

In the IBF Finals, Martinique’s U-18 Men’s and Women’s teams came first. In the women’s competition, Saint Lucia came second and in the men’s, fourth. The tournament’s MVPs were Martinique’s EmerickFoucan for the men and Saint Lucia’s Ramani Lewis-Emmanuel for the women.

Throughout the 55 games over the weekend, the youths were able to gain international level experience and showcase their talents as well as participate in the youth leadership workshop led by MthokoMadonda, Rubel Ahmed and JabulaniMyeza of Reach Sports Management, which was an equally great success.

On completion of Antilles finals, the SLBF hosted its 2017 KFC National Basketball League, which saw Courts Jets take another title with ease. During the month of May, the SLBF participated in the Caribbean Hoops College Camp Exposure in Trinidad. Five players participated, of which Joel Polius was able to gain access to Jacksonville College.

After the camp, he was identified by one of the scouts and received a full scholarship and is presently doing very well academically and basketball at Jacksonville.

Following the camp in Trinidad, the SLBF believes that it will continue its participation in such an endeavour to widen the opportunities for our upcoming players.

The annual KFC Commercial Basketball League was also a success and the PCD/Goddard Group was able to secure their third championship. During the playoffs of our league, the SLBF decided to assist by having a food and clothing drive in aid of Dominica. This also was a success and the Dominica Olympic Committee expressed their gratitude for the items received.

To complete the year of activities, the SLBF commenced its Senior National Team Training, for which at least 40 players were invited. The management team have been working with these players from October 16 and has concluded sessions until January 2018.

The senior male team will be participating in the 2021 FIBA Americup Qualifiers (formerly known as the CBC Championship) in Suriname in June 2018. The SLBF, along with the technical committee, will be making arrangements to commence a 3×3 female league in 2018.

These are a few of the initiatives that the SLBF has been planning for some time now and finally it’s all coming together. This we see as another step in the right direction to revolutionize the sport of basketball. On December 5 and 7, the SLBF, along with the Department of Youth Development & Sports, conducted a Capacity Building Workshop for its affiliates. The SLBF realized that there are some requisite skills and systems lacking for effective functioning affiliates and there was a need for training and sensitization for those charged with this mandate to execute their duties as affiliates. The objectives of the workshop were as follows:
• To assist participants in developing requisite leadership and administrative skills; and
• To assist in the development and growth of the game of basketball on the island.

The workshop took place at the conference room of the Department of Youth Development & Sports, and focused on the topics, “Roles and responsibilities of executive members”, “Sustaining an organization”, “Proposal Writing”, “Financial Management”, and “Public Relations”.

This workshop was geared towards enabling these bodies to explore and reach their full potential and upon its conclusion, it was anticipated that a new level of professionalism will be maintained moving forward. The SLBF was happy to see the majority of its affiliates present and participated in such a venture as this reassures us that there is hope and the more we can shed light and provide guidance, there will be growth.

To close off 2017, the SLBF recently hosted its 3×3 U-18 Youth Qualifiers. The number of teams participating this year grew from last year, which is an indication of increased interest. There were a total of 9 male teams and 3 female teams. The female finals took place before the remaining games were halted due to heavy rains. The remaining games will be concluded in early 2018 and the winner will participate in the finals in 2018. The females to participate in the 2018 Finals will be Team Perfect Storm, which comprises JermiahEvariste, Cleo Jn. Baptiste, Faith Chitolie and SephraSerieux.

The SLBF had undertookn a number of activities for 2017 and we are pleased that we were able to accomplish them all. However, we must say thanks for the support we received this year from our sponsors – KFC, Real Foods, Invest St. Lucia, GOSL, Blue Waters, Taxi Sportswear, FLOW, Top Ranking Electricals, Computer Store, Paints Plus, AIM, RSVP Marketing, Ministry of Sports, Sandals Resorts, Peter & Company Distribution, The Computer Store, Unicomer, Travel & Leisure Services, SLOC, and Alternative Security Services — for their invaluable contributions towards the success of our events. Thanks also to our volunteers from BILD, the Red Cross, officials and referees, Boys Training Centre, and anyone who supported or assisted the SLBF.