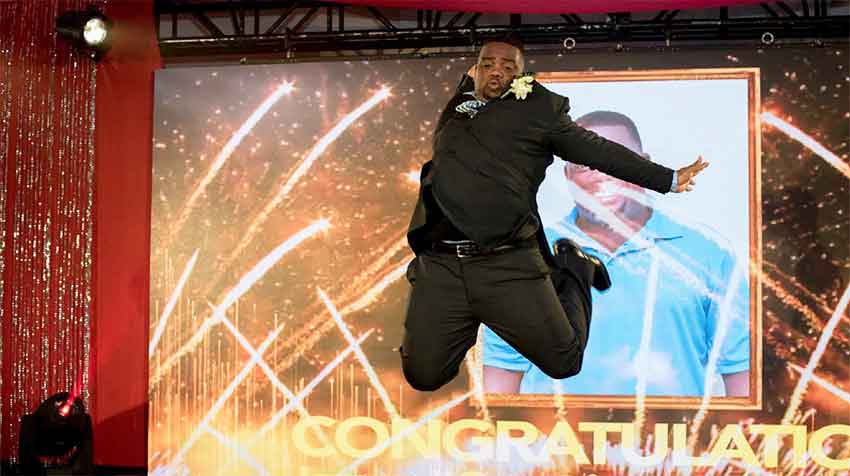 PRESS RELEASE – A Sandals Saint Lucia playmaker beat back over 14,000 fellow employees from throughout the region to win the 2016 Ultimate Employee of the Year Award, the prize given to the best performing team member in the entire Sandals/Appliance Traders Limited/Jamaica Observer Group.

The competition included 23 nominees from Sandals, Beaches and Grand Pineapple Resorts, ATL Automotive Limited, Appliance Traders Limited, The Jamaica Observer and Island Routes Caribbean Adventures. However, it was “Captain Neil” who wowed and dazzled the judges, and was rewarded for his exceptional performance as a member of the Sandals Grande Entertainment Department in 2016.

So confident was he of winning, that when “Captain Neil” Georges left for the awards gala which took place this week at Sandals Ochi in Jamaica, he made a deal with his Managing Director Winston Anderson that if he won the title, he would do a back flip off the stage.

The Awards show took the form of a glamorous, Hollywood-themed gala, and Captain Neil proved himself to be a man of his word. As the company’s Deputy Chairman and Chief Executive Officer, Adam Stewart, announced Georges as the winner, he made his way to the stage and true to his vow, and much to the delight of the audience, he flipped away!

Nominees were assessed by various criteria, including team spirit, training hours, attendance record, ambassadorial qualities, and community and environmental stewardship. After weeks of examining the nominees’ profiles, the selection panel was confident to announce Georges as the Ultimate Team Member – the best of the company’s 14,000-strong team.

On arrival back in Saint Lucia, Captain Neil was moved to tears by the public outpouring of love from his Sandals family. It was almost too much for him, as he was whisked away in a yellow convertible at the head of a motorcade, complete with outriders, which took h.im from the George F.L. Charles Airport to Sandals Grande. Even as he took to the mic to thank the team for their complete support, Captain Neil never lost a beat.

His personality took control of the room and he extended his gratitude to Managing Director Winston Anderson for “allowing me to be myself.” He went on to thank those on the front lines “who supported this journey, including all of the General Managers and other Managers in Saint Lucia.”

Neil believes in Team Saint Lucia, congratulating his fellow competitors, Marcus and Davina, who, like him, are past students of Entrepot Secondary School.

In summing up the celebration, Anderson spoke to “the creation of the One Sandals, One Team approach as the future of Sandals in Saint Lucia”. He went on to recognize General Managers Michael James and Chris Elliott for their sterling contributions to the marketing of the resorts, having just returned from the Sandals in Overdrive Marketing campaign in North America.

Georges will enjoy an enviable prize package, including a luxury-included, all-expenses paid trip for two to an overseas Sandals or Beaches property with an exclusive private jet round-trip transfer to the destination of choice, champagne service, luxury ground transfers, a host of VIP resort experiences, US$2,500 and an Ultimate Team Member trophy.