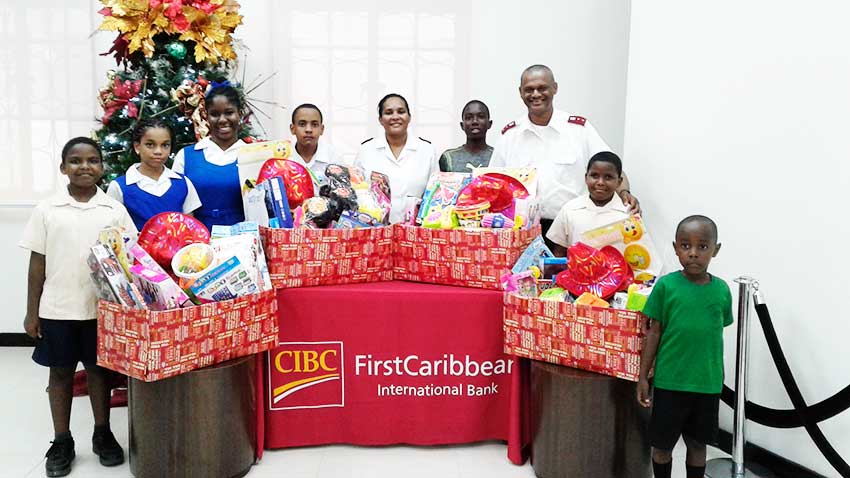 PRESS RELEASE – THE Salvation Army recently received a consignment of toys for distribution to Dominican and Saint Lucian children. The donation was handed over by a small contingent of children of staff members of CIBC FirstCaribbean Bank, who contributed and played an active role in canvassing their peers to participate to the drive.

Both the Salvation Army and CIBC First Caribbean operate in Dominica. With the need for support still high in the wake of Hurricane Maria, and the bank’s longstanding relationship with the Salvation Army, the two organisations combined efforts through the Salvation Army’s annual Kettle Drive, with a view to sharing part of the proceeds with Dominican families. To this end, children of staff passed up on the annual bank-sponsored Christmas toys this year, opting instead to have them donated to the children of Dominica.

The bank concluded its internal food drive on December 19. This is an annual undertaking by bank staff as their contribution to the Salvation Army Kettle Drive which concluded on December 24.

Annually, approximately 1000 homes have been relying on the proceeds from the drive to enjoy some Christmas cheer. The activity makes hampers of food and clothing available to those in need island-wide.

Persons wishing to support or volunteer with the Salvation Army may contact Captain Derrick Mitchel, Commanding Officer of the Salvation Army at 452-3108, sacastries@yahoo.com or visit their office at 12-14 High Street, Castries.