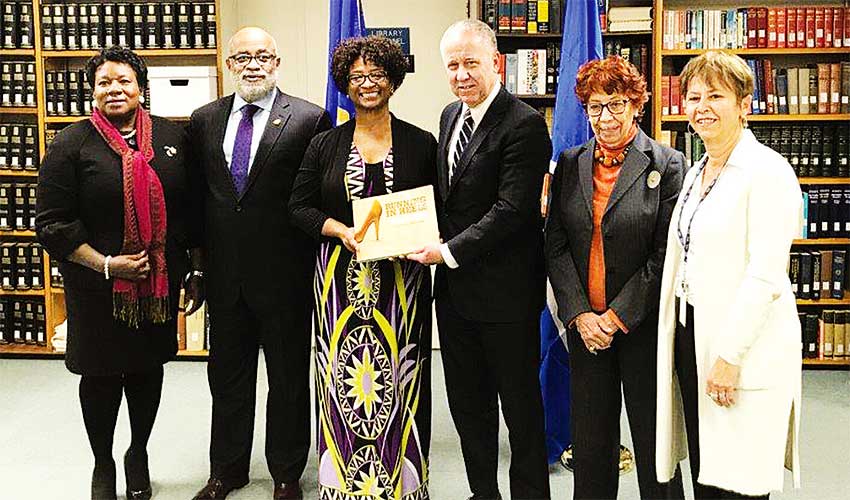 PRESS RELEASE – THE new Saint Lucian publication, “Running in Heels, Women and Politics in Saint Lucia 1961-2016”, co-authored by Yasmin SolitaheOdlum and Barbara Jacobs-Small, saw its first U.S.-based launch on December 14 at the Columbus Memorial Library of the Organization of American States (OAS).

This second launch was part of the commemoration of Saint Lucia’s National Day, held each year on December 13, and showcased the 48 women who populated Saint Lucia’s political arena in electoral office and the Senate — and whose experiences make up the narrative of the publication.

In attendance were high-level officials of the OAS, representatives of the Caribbean diplomatic corps, and members of the Saint Lucian diaspora resident in Washington, DC. The gathering was addressed by Ambassador Nestor Mendez, Assistant Secretary General of the Organization of American States; His Excellency Ambassador Edmunds and Ambassador Carmen Moreno, Executive Secretary of the Inter-American Commission of Women.

They each noted the timely release of “Running in Heels”, seeing it as a catalyst to encourage other women in the Caribbean in general — particularly younger women — to consider a career in politics. As OAS Assistant Secretary General said: “It is important that our young girls be afforded the same exposure to political life as their male counterparts and are socialized to see themselves as future political leaders.”

The Saint Lucian top diplomat lauded the publication as ‘“a piece of work that highlights the strength and commitment of St. Lucian women in politics, despite many barriers to their ascension. A must read history!”

This first U.S.-based launch of “Running in Heels” follows the successful premiere launch of the publication at Government House in Saint Lucia on Tuesday, November 28 under the distinguished patronage of Her Excellency, Dame PearletteLouisy, Governor General of Saint Lucia.

The highlight of this first launch was the formal recognition of the women in Saint Lucian politics for their respective contributions to the political development of Saint Lucia.

Co-author, Barbara Jacobs-Small, who was unable to attend this launch due to a prior commitment, lent her presence to the occasion in a video production which gave the audience a peek into the process as narrated by its co-authors. A second presentation was also shown which provided highlights of the premiere launch and extracts from the publication.

At this launch, complimentary copies of the book were given to the Assistant Secretary General of the OAS, as well as to Cletus Springer, Director of the Department of Sustainable Development of the OAS, who endorsed the publication.

As was done in Saint Lucia, all the proceeds from sale of books will be donated to the Women’s Support Centre in Saint Lucia to assist with the programmes for victims of gender-based violence and their families.