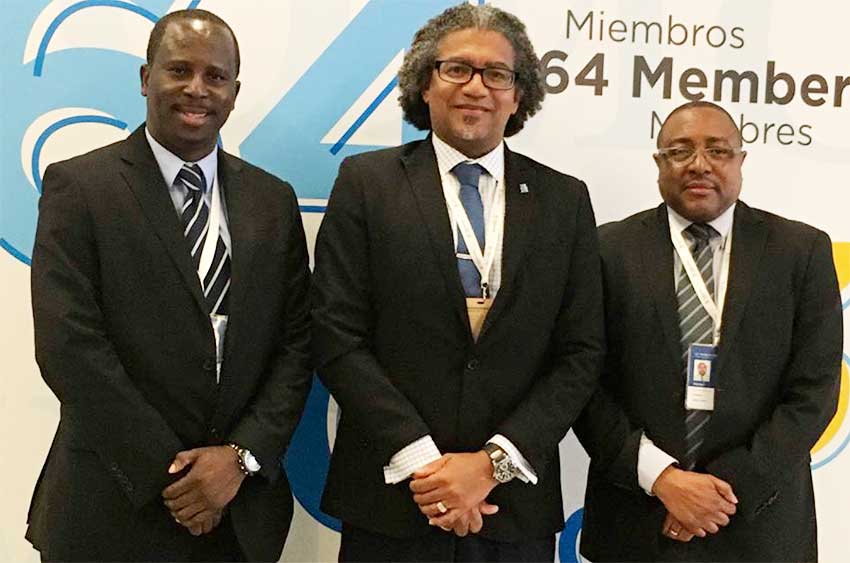 MADAM Chair, Saint Lucia is very pleased to be here in Buenos Aires at the first World Trade Organization Ministerial Conference to be held in South America.

Let me begin by first congratulating you on your assumption of the chairmanship of this the 11th Ministerial Conference of the WTO and through you express my profound gratitude and appreciation to the Government and people of the Republic of Argentina for their warm hospitality as host of this 11th session of the Ministerial Conference.

Remarks
Madam Chair, we are gathered here at a critical juncture in the history of the WTO of which we are a founding member. The state of play on the various negotiating subjects on which we have failed to achieve consensus is of great concern to my country as a small vulnerable economy, which aspires through the WTO and multilateral negotiating process, to secure agreed rules and disciplines on trade matters which are important to our development interests.

Beyond its challenges with negotiations, the multilateral trading system is also confronted with rising sentiments, especially among citizens of some advanced economies against economic globalisation and integration. These sentiments which some interpret as a backlash against multilateralism are being amplified in the political arena leading to a resurgence of nationalism and calls for disintegration and withdrawal from regional and multilateral agreements.

Madam Chair, Saint Lucia, however, believes that in the face of these challenges what is needed is not despair or retreat but to reaffirm and strengthen our commitment to multilateralism and the pivotal role of the WTO in our global governance framework and architecture.

We, therefore, take this opportunity to reaffirm our commitment to the WTO and the rules-based system as we believe it is the best available approach to ensure transparency, legal certainty and predictability in the conduct of international trade.

Madame Chair, as a small open economy, we believe there is a compelling nexus between trade and economic development. Hence a rules-based trade environment that takes account of the diversity of the membership with respect to their stage of development and capacity to engage in international trade is of great importance to us.

Madam Chair, the Marrakesh Agreement in its preamble underscores the centrality of development in the multilateral process and mandates us to ensure that developing countries, such as Saint Lucia, secure a share of world trade commensurate with their economic development needs. Against this backdrop, completing the Doha Development Agenda would enhance the capacity of small states to realize the intent and objectives of the WTO as a force for good in the world.

Moreover, given the variable geometry among members, the Special and Differential Treatment (S&DT) proposals as was presented by the G90 Group and presented in Nairobi are critical to enhancing the capacity of SVEs like Saint Lucia, to implement and benefit from WTO Agreements, as well as discharge obligations to members. As such, Special and Differential Treatment must be a part of the outcome of this Conference and remain a key principle and an essential element of future WTO Agreements.

Madam Chair, this year, many small and vulnerable economies in the Caribbean, in particular, our neighbouring territories of Dominica and Barbuda, suffered massive devastation and absolute destruction of critical infrastructure from two unprecedented hurricanes [Irma and Maria]. The entire island of Barbuda was declared unfit for habitation while the post-hurricane impact assessment has measured Dominica’s loss to be over 200% of GDP.

These catastrophic weather events with which we are faced on an annual basis as a result of our geography present a perpetual existential threat to our economy and our capacity to trade. Given this reality, I believe the time has come for a systemic response from the WTO to assist members affected with such shocks and force majeure events through a special dispensation and accommodation in the rules, to allow them policy space and the full flexibility of the multilateral trading system to reconstruct and to recover without contravention of their existing obligations. With this in mind, Saint Lucia supports the SVE Declaration to this Conference as a workable guide in this regard.

Concluding Remarks
Madam Chair, notwithstanding the inconclusive nature of negotiations on the slate of the various thematic subject areas on which we have engaged over the last two years, Saint Lucia reaffirms its support for multilateralism as the best option for small states and supports a mandate from this Conference for continuation of the work on Fisheries Subsidies given our commitments to the Sustainable Development Goals as well as the work programme on small states; micro, small and medium enterprises (MSMEs); as well as the establishment of a working group e-commerce.

In closing, Madam Chair, Saint Lucia remains committed to working with all members to ensure a positive outcome to this Conference and to help create a multilateral trading system that is responsive, inclusive and addresses the development imperatives and challenges of small, vulnerable economies such as Saint Lucia.

I urge all members to work together to find the political will to make this a reality.
Madame Chairman, I thank you.