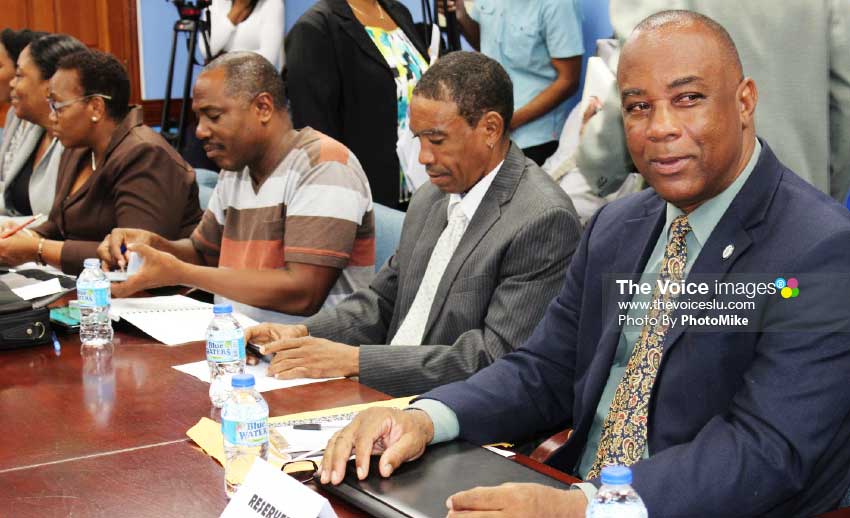 Former Police Commissioner, Cuthbert Phillips, has called for a budget, war room and the selection of a dedicated team in the police force to fight crime.

Also, Velon John, a former government minister, is calling on the police to provide information on its conviction rate as a necessity in the crime-fighting process.

These are just some of the recommendations coming out of last month’s crime symposium that National Security Minister Hermangild Francis says is under consideration by Cabinet.

Francis said this week that Cabinet had begun to take stock of the recommendations and conclusions emanating from the symposium; further, that he is aiming for the development of a white paper and the creation of a working group as another positive outcome of the symposium. The Minister promised that the findings from the activity would not be allowed to gather dust on a shelf, nor was the activity simply a talk shop.

“While Cabinet deliberates on this document, because we must give it close attention, I can give the assurance that a lot is happening that constitutes a comprehensive response to the issue of crime and crime prevention. We are engaging or in some instances re-engaging the police, our private sector, friendly governments and the Office of the Attorney General, just to provide an indication of what’s happening,” stated a release from his office.

The crime symposium saw a massive turnout by many stakeholders across the island, including Phillips, who said that it would be futile to fight crime without resources and that the police needed a war room to fight crime.

“When I say a war room, (I mean) you must have persons who are assigned to fighting against crime — serious persons — and that is their job,” he said.

Phillips called for civilians to take over crime documentation instead of the police, leaving more of them available for crime-fighting. Phillips also spoke of ways the fight against crime could be financed, such as through traffic violations and partnering with friendly nations willing to assist St. Lucia in that regard.

John wanted to know from the police, after they made a presentation on crime statistics for the past four years including the first three quarters of this year, what they meant by the detection rate and why they did not speak about the conviction rate. According to John, it is the correlation between the two that provides in some measure the efficiency of the processes involved in crime interdiction.

Another former government minister, Richard Frederick, noted that resources are required to fight crime which must be fought on two fronts to produce immediate and long-term results. One of his suggestions was to provide people engaged in crime with a platform, like cricket or football, to engage each other with the hope of resolving some of their differences. He also spoke of using institutions like the family, schools, and religion to help shape individuals’ characters.

Also speaking in that vein was Opposition Senator Guibion Ferdinand, who said that consideration should be given to prevention and correction. He believes that while much emphasis is given to correction, prevention is usually not given as much attention.

Callistus Jean Louis of the Boys’ Training Centre and the Criminal Rehabilitation Board recommended that the fight against crime must be intelligence-driven so police would know what they are dealing with.

Jean Louis said the data collected can be centralized, analyzed and used when Cabinet is making policy decisions to fight crime.

Peter “RasIpa” Isaac, President of the Craft Vendors Association, highlighted the delay in matters coming to court, the need for proper courthouses and the overhauling of the judicial system to facilitate the speedy hearing of matters. He even called for responsible and professional crime reporting from journalists/reporters.

Dr. Stephen King of the group, RISE, noted that crime and violence are symptoms of a mal-developed society and that a holistic approach was needed as opposed to a silo approach from law enforcement and the justice system.

Acting Police Sergeant, Zachary Hippolyte, turned the discussion on the fight against youth unemployment and crime, calling on the Ministry of Education, Sports and Development to assist the National Youth Council on developing a working youth policy that outlines all the challenges faced by the youth as there is no youth policy. He emphasized the need to see the youth as a solution and not a problem and advocated working with them to address some of the problems they face as this would help reduce crime.

Benedict Jn. Baptiste, better known as “Pastor Ben” from Redemption Ministries, brought into the mix a spiritual dimension to crime-fighting, noting that crime must also be fought from a spiritual aspect, not only from a physical one.

He said that for five years a group called “Prayer Warriors” had been praying at the Castries City Hall and for each of those years crime in the country had reduced. He said the group has yet to meet this year because of the renovations that were being made to the building. He linked the spike in homicides for this year to the unavailability of the group for prayer meetings. He called for funds to be made available for prayer rallies across the nation.

Long-time advocate for women and children, Catherine Sealys of Raise Your Voice, straight away attacked the agenda for the symposium, calling it deficient, in that youth and crime had no business in the discussion and should have been dealt with as a social and public health problem. She said that marijuana was a policy decision and that domestic violence, the root cause of crime, was placed at the bottom of the agenda.

She called on the Finance Minister and the Director of Budget to state where the money to fight crime was coming from. She stated that all that was needed at the start of the symposium was for the audience to say where they were on crime, where do they want to go on the subject, what were they doing to get there and would they commit themselves to the fight so they could leave with a plan that very same day on how to deal with the problem.

Sealys, as she has been doing for the longest while now, called for the OECS Family Law to be implemented as such a law would take care of a number of societal problems today. One such problem the Family Law would rectify is what obtains today in family court where fathers are imprisoned for failure to pay child support.

Minister Guy Joseph, who acted for Prime Minister Allen Chastanet at the symposium, said it would be better to find jobs for men unable to pay child support and deduct the payments from the men’s salaries rather than imprisoning them. Sealys reminded all at the symposium that the Family Law, if implemented, would easily remedy the problem of delinquent fathers.

Keith Smith from Back on Track Ministries believes that what the country needs most is the spirit to engage offenders. According to him, there should be a sense of wanting to engage, improve and empower the lives of men and women who seem to demonstrate anti-social grudges because when such grudges fester, they become anti-social behaviours. People, Smith said, are angry for different reasons and so the hope they are given must be sustained. He also called for more school counsellors and social workers to be employed.

Other recommendations spoke to the implementation of after-school programmes to mentor the youth, the need for community policing for the role it plays in crime prevention and detection, the need to review the education system which tends to emphasize the intellectual and not the technical pursuits, and for a systematic and sustained approach driven by data to dealing with crime.

Levi from the Rastafarian community highlighted the changing norms of behaviour between present-day youth and the youth of yesterday. He cited the lack of manners in today’s youth; and the sad behaviours of the country’s leaders, such as walking out of parliament, as bad examples, as well as the system’s double-standard in failing to imprison people involved in white collar crimes yet imprisoning society’s poor who commit crimes.

Merphilus James, from the National Council of Persons with Disabilities, said that people living with disabilities are highly vulnerable to acts of crime and that incidents of crime against them are at times more than that of the general population. He said he would like to see that featured in the crime statistics put out by the police and called for legislation against the culture of “wanjma”, an arrangement made by families or caretakers of victims with perpetrators of sexual and physical violence.

Minister Francis says he was thankful for the input received and is heartened by the public’s firm commitment to help government stamp out criminality.