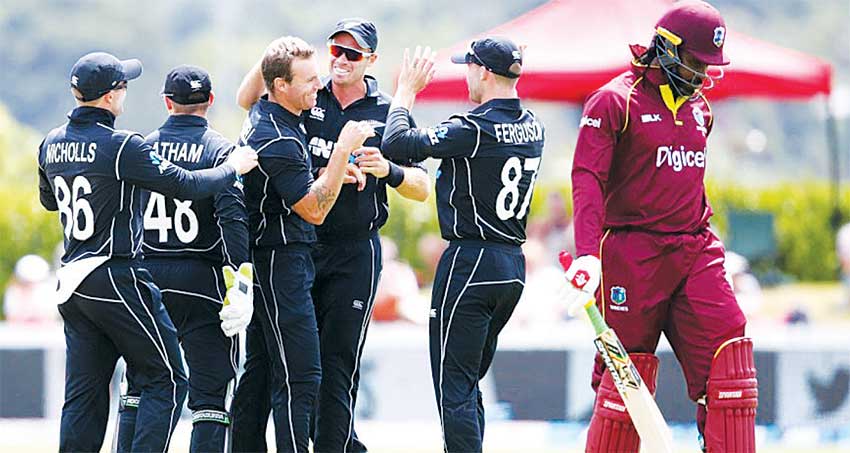 CHRIS Gayle could be a doubtful starter for West Indies’ second ODI against New Zealand in Christchurch on Saturday. The opener scored 22 in Wednesday’s first ODI in Whangarei, and did not field during New Zealand’s innings. New Zealand won the match by five wickets.

“He took ill,” West Indies coach Stuart Law said after the match, when asked why Gayle hadn’t taken the field. “He’s going to seek further medical advice once we arrive in Christchurch tomorrow. At this point in time, I can’t give you any further details of what’s going on.”

Bracewell pulls through after knee injury

Doug Bracewell’s return in New Zealand colours may have had a happy ending — he took a match-winning 4 for 55 — but it began with the fast bowler feeling “nervous”.

A knee injury picked up last season has been causing him some trouble recently, so much that he didn’t feel entirely well returning to domestic cricket in 2017-18.

‘’I’m not going to lie; it was pretty tough, it was quite sore but I managed to get through,” he told the New Zealand Herald. ‘’In the first couple of games [with Central Districts], I was a little nervous and anxious.”

But things are looking a bit better now, and being back among his friends and team-mates again appears to have helped.

“It has improved a hell of a lot in the last couple of weeks so there are positive signs there. It was exciting but I’ve been around this group a while. It’s just good to be back when the team is going well. The guys were all encouraging and gave me that belief,” Bracewell said.

Law did not divulge any details of Gayle’s illness.

“I’m not a doctor,” he said. “I can’t give you any more, so I apologise. We should get a full appraisal.”

Sent in to bat, West Indies posted a total of 248 for 9, which New Zealand overhauled with four overs to spare. Law said conditions changed significantly through the course of the match, and that New Zealand had won an important toss.

“We would have liked to have bowled first as well,” he said. “Whether or not the wicket got damp through the covers…it was certainly a tackiness to the surface when the game started.

“I looked at it half-time and it was bone-dry. You would have liked an even contest, not taking anything away from New Zealand at all. We saw our opening batters — they’re pretty good strikers of a cricket ball — they were having trouble locating it, which means the wicket was doing something. We didn’t see that this afternoon.”

Gayle and Evin Lewis put on 40 in 10.1 overs for the first wicket. Lewis went on to score 76 off 100 balls. Law felt his dismissal in the 36th over — an lbw that replays suggested was wrongly given, when West Indies had run out of reviews — was a turning point, given his shot-making skills and those of Rovman Powell, with whom he had added 43 in just 31 balls.

“He [Lewis] was circumspect with the deliveries he attacked. He’s a wonderful striker of a cricket ball,” Law said. “Today he wasn’t able to be as free as he would’ve liked but he showed some class. He showed the ability to get through some really tough times, to build an innings, and then unfortunately given out lbw when he was set, ready to continue that partnership with Rovman Powell.

“Those two can score very quickly once they get going and 15-20 an over is not out of the question with those two.”