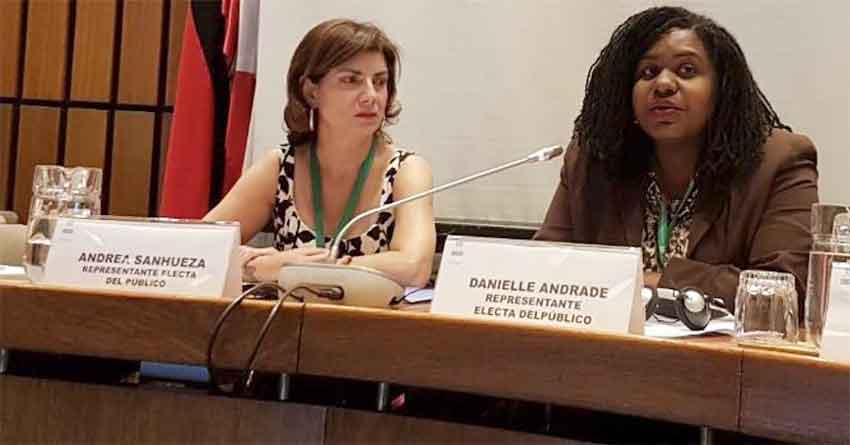 PRESS RELEASE – THE 8th Negotiations on Principle 10 taking place in Chile commenced the same way it concluded in August, with members of the public echoing an impassioned plea for governments to be more progressive in their deliberations to improve environmental democracy in Latin America and the Caribbean.

The negotiations, which ran from November 27 to December 1, 2017 at the UN ECLAC in Santiago, are seeking to implement Principle 10 of the 1992 Rio Declaration, in which States pledged to promote access to information, public participation and access to justice in environmental matters.

In her remarks, Elected Representative of the Public (Chile), Andrea Sanhueza, said, “Expressions such as ‘facilitate, promote or encourage’ are insufficient for the agreement to translate into real changes at the time of implementation. We call on governments to leave behind fear: fear of the very concepts of effective participation and advocacy. That is a twentieth century outlook and it is time to overcome it and move towards the future.”

Meanwhile, Danielle Andrade-Goffe, Elected Representative of the Public (Jamaica), told the gathering, “We have come to express hope that as we embark on negotiations for the other articles, that countries seek to strive for a result that sets a common ground and a clear minimum standard. We know that we are eager to complete the negotiations, but we need to ensure that we have strong and clear provisions that countries are not only able to easily interpret and implement but can be proud of.

“In particular, in Article 9, countries have the potential to set a regional standard to remove barriers on access to justice. We can have the most progressive laws giving rights of access to information and participation in environmental matters, but if people do not have the means to enforce these rights, then the effectiveness of those laws are seriously undermined and the rights are rendered futile.”

The public commends countries such as Chile, St. Vincent and the Grenadines, Trinidad and Tobago, Costa Rica, Colombia and a few others that have pledged their commitment to negotiating a legally-binding agreement. However, it must be mentioned that Mexico indicated that “a legally-binding agreement is not necessary” and that they are not prepared to accept provisions that go further than their national legislations.

In light of this, the public urges all governments who are not genuinely striving to raise the standards of environmental governance in the LAC region to heed the sound advice from UN Rights Experts who called for LAC governments to adopt a strong, legally-binding treaty on environmental rights.

In a press release issued on the first day of the negotiations, the experts noted that the agreement is particularly important because the region is one of the most dangerous in the world for environmental human rights defenders. In 2016 alone, more than 100 environmental defenders were killed in the region.

The negotiations can be followed live at http://eventos.grupoz.cl/cepal/. Countries willing to be a part of this transformative process can simply contact ECLAC at principio10.lac@cepal.com.