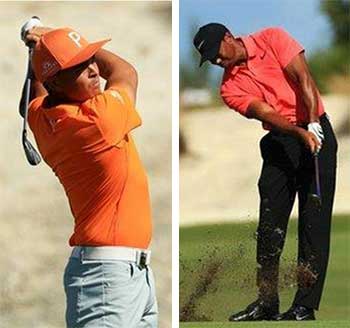 RICKIE Fowler hit a stunning 11-under-par 61 to win the Hero World Challenge after Tiger Woods capped his return from injury with a solid final round.

American Fowler, 28, trailed overnight leader Charley Hoffman by seven shots but made eight birdies in a dazzling front nine to lead at the turn.

He added three more birdies to break the tournament and course records at Albany Golf Club in the Bahamas and win by four strokes over Hoffman.

The 14-time major winner, playing his first tournament since withdrawing from February’s Dubai Desert Classic with back spasms, went out in 31, hitting three birdies and an eagle at the seventh.

He recovered from a double bogey on 10 with three birdies in his next five holes, before successive bogeys at 17 and 18 saw him finish tied ninth on eight under overall in the 18-man unofficial PGA Tour event.

Having had multiple back operations in recent years, Woods said he felt “no pain” during his latest comeback, and that his play indicated a “bright future”.

Fowler on fire: Hoffman’s nearest challengers at the start of the day were Spieth and Justin Rose, both five shots behind, but it was Fowler who overhauled the deficit in remarkable fashion, hitting birdies on the first seven holes to draw level with his compatriot.

Showing relentless accuracy with the putter, Fowler also deftly chipped in at the fifth to keep his streak going, only failing to birdie the par-three eighth as he took just 28 strokes to cover the front nine.

A round of 59 seemed within reach after Fowler added birdies on 11, 13 and 15 and, though the American aggressively looked for birdie chances on the last three holes, he had to settle for par at each.

“I needed to get off to a quick start today to at least show Charley I was there,” Fowler told the Golf Channel. “We took care of that and kept it rolling from there.”

In favourable conditions, after a strong breeze affected the third round on Saturday, only three players failed to shoot under-par rounds on Sunday.

Unfortunately for Hoffman, he was one of them — a level-par 72 featuring two bogeys and two birdies not enough to stay with Fowler’s surge.

What next for Woods?

Following rounds of 69, 68, 75 and 68, Woods said he was “very pleased” with his performance, having shown some “good signs” all week.

Those promising signs were evident again in his final round, especially off the tee – a huge drive on seven setting up an eagle to go with six birdies overall, only for his challenge to falter on the back nine.

While Woods will be cautious after previous comeback attempts proved short-lived, he can take encouragement from having beaten the likes of US PGA champion Justin Thomas, US Open champion Brooks Koepka and world number one Dustin Johnson.

“The issue was how my scoring was going to be, how was my feel? How am I going to get used to the adrenaline in my system, because it’s the first time in a while – that took a little bit of time”.

The 2018 Masters, the first of golf’s four major championships, starts on April 5 and Woods said he is still working out a schedule to prepare him for the majors.

“I need to play enough but not play too much and I don’t know the best way to go about it yet but we will figure it out,” he said.