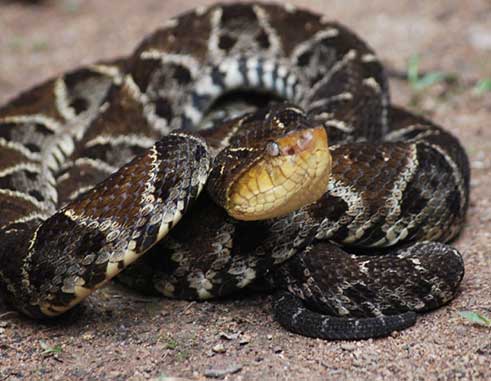 PRESS RELEASE – On December 7 and 8, the Saint Lucia National Trust (SLNT) and the Forestry Division within the Department of Agriculture, Fisheries, Natural Resources and Co-operatives facilitated two Fer-de-Lance Safety Awareness Training Workshops for people at risk of being bitten by the Fer-de-Lance due to their area of employment.

The training was undertaken as part of the project entitled “Conservation and Management of the Endemic Fer-de-Lance (Bothropscaribbaeus) on the small island developing state of Saint Lucia”.

The project is funded by the Global Environment Facility Small Grants Programme (GEF-SGP), implemented by the United Nations Development Programme (UNDP) and is jointly executed by the SLNT and the Forestry Division.

The goal of the project is to reduce the number of snake bites island-wide by 80%, and eliminate deaths and disabilities due to snake bites while ensuring that the national population of the Fer-de-Lance is stable and viable with the benefits from it better understood by 2019.

The training session held on December 7 was hosted by the Saint Lucia Electricity Services Company (LUCELEC) for its employees at the LUCELEC Cantonnement Office in Vieux Fort. The second training session was held on December 8 at the Fisheries Division Conference Room in Pointe Seraphine, Castries. The participants of the second session included utility workers, surveyors and nature tour operators.

Joanna Octave-Rosemond, SLNT’s Programme Officer for Natural Heritage Conservation, explained that effective wildlife management calls for the management of species, their habitat, and the people who are either affected by or have an impact on the species. Hence, she indicated that proper management of the Fer-de-Lance calls for ensuring that people who work in Fer-de-Lance territories are knowledgeable about the species and are aware of how to protect themselves while on duty. The training workshop is one of the activities in the 5-year Management Plan for the Fer-de-Lance and was considered a priority for funding by the GEF-SGP.

The Senior Wildlife Conservation Officer within the Forestry Division, Pius Haynes, noted that among the four existing snake species found on St. Lucia, the Fer-de-Lance is the only venomous snake.

“The public has generally expressed an inherent fear of the species precisely for this reason,” he stated.

He further noted that among the best ways to allay the fears of the public and ensure the health and safety of people living and working in snake habitats are through education and awareness, training of personnel on how to prevent snake bites, what protocols to follow if bitten, and using appropriate personal protective equipment and gear when working or venturing into the habitat of the Fer-de-Lance.

In support of the goal of eliminating deaths and disabilities due to snake bites, the medical community has also been involved in the Fer-de-Lance education activities. The medical material presented at the training session on December 7 was provided by Dr. Charles Greenidge, and on December 8, Dr. Martin Didier delivered a presentation to participants on the immediate steps that should be taken in order to prevent deaths and disabilities when bitten by a Fer-de-Lance.