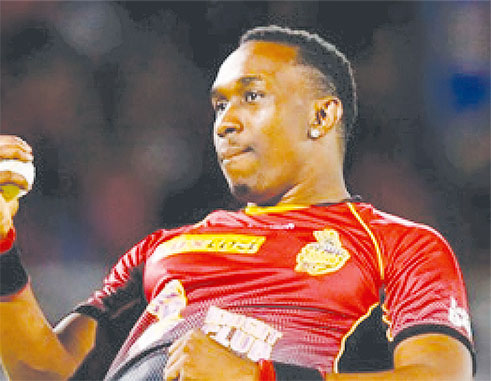 DWAYNE Bravo says it is unlikely he will play for West Indies again, and sees his future solely in the various short-format leagues around the world.

After tearing his hamstring in Australia’s Big Bash League in December 2016, the Trinidadian all-rounder endured a lengthy absence from all cricket. Bravo has not played for West Indies since the T20 series against Pakistan in the preceding September, and believes his chances of a recall into the team are slim.

“I am looking at these tournaments as a chance to continue playing cricket,” Bravo said. “As long as I can play cricket, I am happy. As far as internationals are concerned, I have been dropped from the West Indies team.

“I was dropped while I was fit. I don’t think now, at 34, it would make any sense coming back. I just need to see what is left for me, for my fans to see Dwayne Bravo playing cricket. That is my priority.”

Bravo has not played Test cricket for West Indies in seven years, and had not featured in an ODI since 2014. He says his absence from the game at the start of this year hurt, but he was happy to return to the T20 circuit.

Currently in Sharjah for the T10 League, Bravo is part of the Maratha Arabians as a late recruit, following Kumar Sangakkara’s withdrawal from the tournament. Earlier this year, injury forced Bravo to miss the 2017 IPL, but he has gone on to play in the Caribbean Premier League (CPL) and the Bangladesh Premier League (BPL).

“I didn’t play for nine months [seven months],” Bravo said. “That is a lot. I missed the game and I have to be careful now. Playing BPL, we made it to the semifinals. Unfortunately, we didn’t make it all the way through, but I am happy to be playing again.”

Bravo has played more T20 matches (364) than anyone other than his former West Indies team-mate Kieron Pollard (399). Perhaps predictably, Bravo has also adapted quickly to the even shorter 10-over format.

Bravo, who was one of the victims in Shahid Afridi’s hat-trick on the opening night of the competition, found his range with the ball on day two in Sharjah. He took 2 for 12 off his two overs, as Maratha Arabians secured their first win in the competition against Team Sri Lankan Cricket.