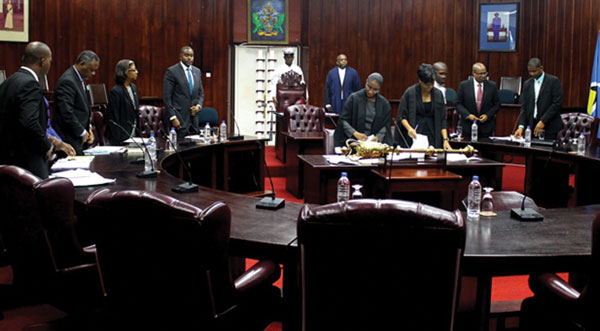 THERE are two important lessons for St. Lucia from the British practice of electing the presiding officers for their House of Commons. The first is that convention dictates the mode of those elections, and convention is strictly observed by all political parties. Some of the conventions have been codified in the Standing Orders of the House.

Has the St. Lucian Legislature, since its creation in 1979, adopted any conventions on the election of its presiding officers, whose observance would have precluded the anomalous situation of the lack of a Deputy Speaker in its House of Assembly for sixteen months? Indeed, it has and its non-application is at the root of the problem of a Speaker without a Deputy.

From July 1979, St. Lucia’s political parties adopted and have always observed the convention that the governing party nominates a person not a member of the House to be Speaker and a member from its side to be Deputy Speaker. The only exception to latter occurred at Independence in February 1979, when Prime Minister John Compton of the United Workers Party (UWP) requested that the Opposition St. Lucia Labour Party (SLP) hold the Deputy Speaker spot in the new Parliament to promote national unity on the occasion of the granting of independence.

The opposition Saint Lucia Labour Party (SLP) has refused to nominate one of its six MPs to the position because it accuses Prime Minister Allen Chastanet of flouting the convention in his desire to reward all his victorious party members with ministerial salaries; and it is eschewing complicity in discarding convention.

The SLP claims that it will not endorse the Prime Minister’s profligacy of the largest Cabinet in the country’s history. On the other hand, Allen Chastanet’s view is that there is no constitutional provision for the Deputy Speaker to be chosen from the ruling party and, therefore, no reason why the Opposition cannot provide a nominee.

However, we have seen that in the absence of constitutional rules, British practice firmly adheres to convention with regard to Parliamentary affairs. Consequently, the immediate and simple way forward out of the situation in Saint Lucia is for the House of Assembly to continue observing the convention of the Deputy Speaker emerging from the government side. This means that Prime Minister Allen Chastanet should nominate one of his ministers (a junior one – one of the Ministers in a Ministry) to be the Deputy Speaker.

If the benefit of a ministerial salary is what has caused the Prime Minister to appoint all his parliamentarians to the Cabinet, then this may be the opportunity to elevate the position of the Deputy Speaker by paying that person a salary commensurate with a full-time role so that the person can function fully, like the Speaker and with the Speaker, in the business of presiding over House matters. That person would be a deputy in the true sense, knowledgeable and able to chair the House in the case of a long absence of the Speaker and not someone who merely controls the House proceedings for ten minutes while the Speaker takes a break.

The second important lesson from the British is that the numerical size of the House of Commons facilitates the election of its presiding officers. The Speaker and the three Deputies must be members of Parliament. In a Chamber made up of 650 parliamentarians, a political party can afford to have one of its members become the Speaker and an impartial arbiter of its proceedings. Finding three persons to fill the deputy positions is not problematic, either.

In the new Parliamentary session in the UK in June 2010, nine were nominated for the posts. When one Deputy – Nigel Evans – resigned on September 11, 2013, seven candidates were nominated to replace him.

In Saint Lucia, with a 17-member Legislature and with just two parties in the House of Assembly, unsurprisingly, the constitutional provision for the Speaker to come from the House has never been applied. No party, particularly the one in government, would want to lose one of its members to the “higher” calling of Speaker, especially if it held only a slim majority of seats in the House. The constitution’s framers, recognising the problem that a small parliament posed for the selection of a Speaker from within that chamber, provided the option to go outside.

Consequently, the governing party, which always nominates the Speaker, has consistently chosen someone closely aligned with the party but who is not a parliamentarian to be the Speaker. Although the Speaker is to be impartial, history suggests that the Speakers in St. Lucia have tended to favour the government side. For this reason also, the convention has been for the Deputy Speaker to be chosen from the ruling party benches.

The contrast between the British method of selection of House of Commons presiding officers and that of the Saint Lucia House of Assembly is yet another indicator that the Westminster system of government is inappropriate for a very small legislative chamber like Saint Lucia’s. In the Westminster system, the Cabinet or the Executive is part of the Legislature but the extremely large numbers in the British House of Commons allow for backbenchers to exercise checks on the Executive. In Saint Lucia, this is not so. The Cabinet is the larger percentage of the majority side in the House and so dominates the Legislature.

When Allen Chastanet appointed every member of his winning Parliamentary team to the Cabinet, he reinforced this dominance; but he also unwittingly validated the call by the citizenry, expressed in the 2013 Report of the Commission on Constitutional Reform in Saint Lucia, for a system of government where the Executive is separate from the Legislature.

The inhibition from operating like its Westminster parent, caused by the smallness of St. Lucia’s House of Assembly, justifies their request. If the small number of MPs on the governing side of Saint Lucia’s House of Assembly precludes them from choosing a Speaker from the Parliament, if all the members on that governing side are to be members of Cabinet, therefore also barring them from choosing a Deputy Speaker from among themselves, if the executive branch is going to continue to so dominate the legislature that not even its Presiding Officers can be chosen in accordance with the Constitution, then the model of government should be changed so that the Legislature is separated from the Cabinet, is autonomous and able to choose its presiding officers from its members as is the general principle universally.

The soap opera of the non-appointment of a Deputy Speaker in Saint Lucia’s House of Assembly, whose most gripping episode to date has been the dramatic illness of Speaker Leonne Theodore-John following a marathon session without relief from a Deputy, has highlighted the truth of the calypsonian Penguin’s refrain, “A Deputy Essential”, and also underlined once again the necessity for constitutional reform in Saint Lucia. That reform should focus on its system of governance – specifically the relationship between and the functioning of the executive and legislative branches.