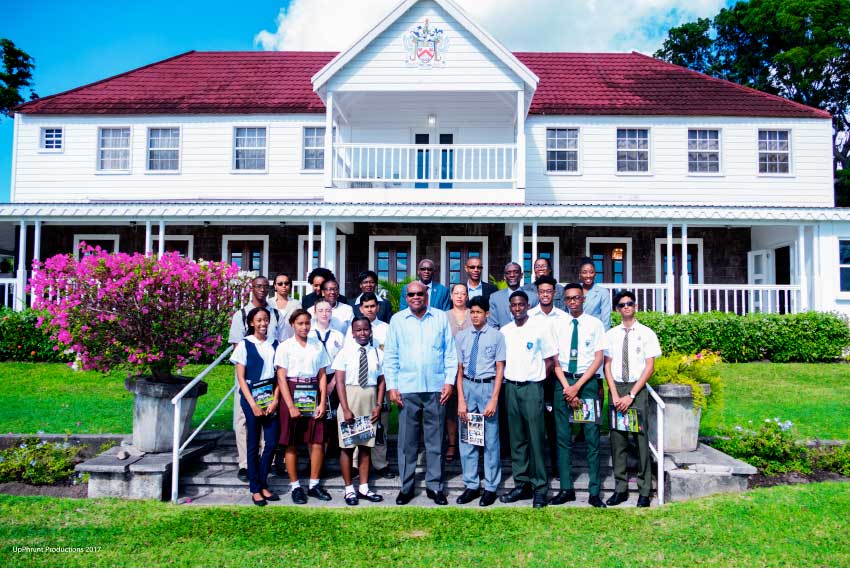 The SEC and Council meeting was held under the Chairmanship of Professor Sir Hilary Beckles, Chairman of CXC and Vice Chancellor of The University of the West Indies.

Opening of Council and Presentation of Top Awards
The opening ceremony for Council and presentation of awards for outstanding performances in the May/June 2017 Caribbean Advanced Proficiency Examination (CAPE), the Caribbean Secondary Education Certificate (CSEC), and the Caribbean Certificate of Secondary Level Competence (CCSLC) examinations was hosted at the St. Kitts Marriott Hotel on Thursday, December 14 at 7:00 p.m.

Shawn Richards, Minister of Education, Youth, Sports and Culture in St. Kitts and Nevis, delivered the feature address at the ceremony. Richards said St. Kitts and Nevis’s hosting of the CXC governance meetings was an indication of the country’s commitment to the region generally and to CXC, in particular.

Professor Beckles gave remarks at the ceremony, urging the awardees to become advocates of causes and stand up and speak up for something.

Sir Hilary noted that the CSEC awardees are provided with a full scholarship by The University of the West Indies once they complete their CAPE or an associated degree. Sir Hilary explained that the scholarship is meant to attract the region’s brightest and best minds to the region’s top university.

Shannon Woodroffe of Queen’s College, a former CSEC awardee, received the first RM Results-sponsored CAPE Mathematics Award. Woodroffe also received the award for Natural Science. She achieved Grade I in thirteen Units, all with “A” in the Module grades.

Jared Johnson of Campion College, Jamaica received the Hodder Education CAPE Humanities Award. He achieved Grade I in nine Units and Grade II in one Unit.

Another student from Queen’s College, Rawletta Barrow, received the award for Most Outstanding Candidate in Humanities. Barrow also achieved Grade I in nineteen subjects.

Aasim Baksh of St. Stanislaus College, Guyana, was presented with the award for the Best Short Story. Baksh’s story was entitled “The Tremor”.

Courtesy Calls
The awardees and a delegation from CXC and the Ministry of Education paid courtesy calls on His Excellency Sir Taplet Seaton, Governor General of St. Kitts and Nevis; Shawn Richards, Minister of Education, Youth, Sport and Culture; and Leader of Opposition, the Right Honourable Dr.Denzil Douglas.

The awardees visited the sister isle of Nevis and toured St. Kitts, including visiting the historic Brimstone Hill Fortress.

The awardees were encouraged by all dignitaries to continue to excel in their fields of endeavours. They were also advised to view their accomplishments not as the end of the road, but as the beginning of a journey that has started.

Registrar’s Report
Council received the 2017 Registrar’s Report presented by Glenroy Cumberbatch, CXC Registrar. Cumberbatch highlighted the Council’s accomplishments in 2017. These included increased candidates by over 2000; addition of one CAPE subject; Design and Technology; groundwork for expansion into the non-English-speaking Caribbean territories; increased marketing of CCSLC, CVQ and CSEC; completion of service charter; and achievement of 97 per cent reliability.

CAPE History Taskforce
Chairman of the History Taskforce, Professor Alan Cobley, presented the report to SEC. He noted that both the enrollment and performance in History have declined over the years.

So far, the taskforce has conducted two surveys and gathered significant entry and performance data on CSEC and CAPE History.

SEC received an update on the development of the CXC Learning Hub and noted that a number of Digital Toolkits have been developed for CCSLC, CSEC, CVQ and CAPE. It was reported that more toolkits would be developed in 2017 and will be housed in NotesMaster platform. SEC also noted that CPEA resources in the form of e-books had been published and that the books were written by pupils who had entered a story competition mounted by CXC in 2014. Members were informed that another competition would be launched in 2017 and CXC would also invite short stories from professional authors.

SEC also heard that at the request of stakeholders, SUBSEC agreed to defer the use of CAD software for Technical Drawing to 2018 in an effort to allow schools to effect the necessary upgrades to their technology and for training in the use of the software to take place.

SEC also ratified SUBSEC’s decision for the establishment of a CXC Learning Institute pending the research and groundwork required.

In the Caribbean Certificate of Secondary Level Competence (CCSLC), English was the largest subject with 4,395 entries, followed by Mathematics with 4,364, Social Studies with 2,616, Integrated Science with 2,450, French with 241 and Spanish with 214 entries.

There was significant growth in the Caribbean Vocational Qualification (CVQ) this year. Trinidad and Tobago continues to be the largest subscriber to CVQ with 2,910 entries, followed by Barbados with 1,338, Jamaica with 923, Turks and Caicos with 17 and Dominica with 11 entries.

Appreciation
Council recorded its sincerest appreciation to the Government and people of St. Kitts and Nevis and the Ministry of Education, Youth, Sports and Culture, in particular, for hosting the meetings and their warm hospitality shown to delegates while in St. Kitts and Nevis.

St. Vincent and the Grenadines has offered to host the 2018 CXC governance meetings.