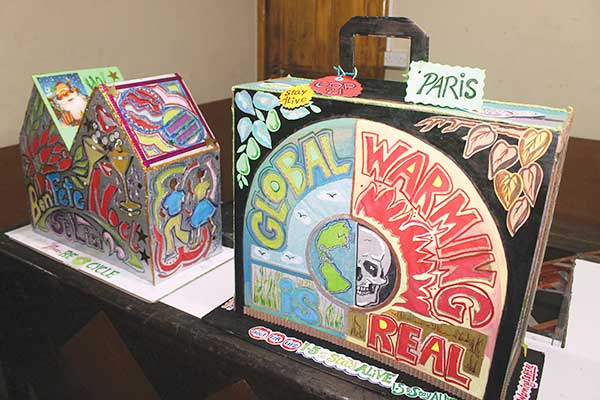 PRESS RELEASE – THE December Festivals are a series of traditional and historical festivals which bring Saint Lucians together in the spirit of community through artistic creativity with the use of light – a symbol of rebirth. Saint Lucia’s Day or Saint Lucy’s Day, the feast day of the patron saint of light, is celebrated on December 13. The December Festivals, with their collective theme of devotion and celebration, are a precursor to this major feast.

• The Lantern Festival – an inventive and competitive showcase of lantern making where youth, adults, artists, families and schools test their creative skills. Around this time, in years gone by, families would hang lanterns out in their balconies in honour of the patron saint. The festival keeps this tradition alive through the display of handcrafted lanterns.
• The Festival of Carols — a captivating performance of master choirs and vocalists from around Saint Lucia.
• The Festival of Light – an innovative spectacle of lights in the city centre accompanied by the parade of lanterns.

The traditional Lantern Festival – a competition showcasing creativity and innovation took place at the National Cultural Centre on Saturday, December 2nd. Pre-judging took place from 11:30 a.m. During this crucial stage of the competition, judges get an opportunity to examine details on the lanterns prior to them being lit and displayed on stage. The lanterns are judged and prizes are awarded with special consideration given to the skill level employed in the creations. Results from the Lantern Competition are announced during the Festival of Light ceremony.

Music as a form of emotional expression never fails to lift spirits and inspire. Through the Festival of Carols, vocalists, chorales and choirs from around the island, spanning across denominations, congregate and lift their voices in celestial chorus for the creation of a spirit-filled atmosphere.

The Festival was a well-run event with impressive performances from the aforementioned individuals and groups who came from around the island to participate in the annual event under the distinguished patronage of Her Excellency Dame Pearlette Louisy.

The Festival of Light Ceremony to be held on Tuesday, December 12, celebrates the close of a year with a spirit of gratitude for the blessings of the past and a hopeful heart of goodwill and prosperity for the year ahead. This year, the evening’s production will centre on the theme, “Celebrating a Community Christmas – The Light We Share”.

The festivities will begin from 7:00 p.m. with a street parade, starting at the Castries City Hall on Peynier Street. A procession of stilt walkers, masqueraders, fire eaters and lantern bearers will be led to the Derek Walcott Square.

This year, for the first time, bikers will join the parade prior to the themed concert which will incorporate music, dancing, drama and lights. Performers will include Saint Lucia School of Ballet and Modern Dance, Rotary Calabashers, Linda “Chocolate” Berthier, Royal Saint Lucia Police Band, Ronald “Boo” Hinkson, Protégé, MenelleDelice and Ezra the Fun Machine.

The anticipated “switching on of the lights” will close off the concert, followed by a celebratory fireworks display.