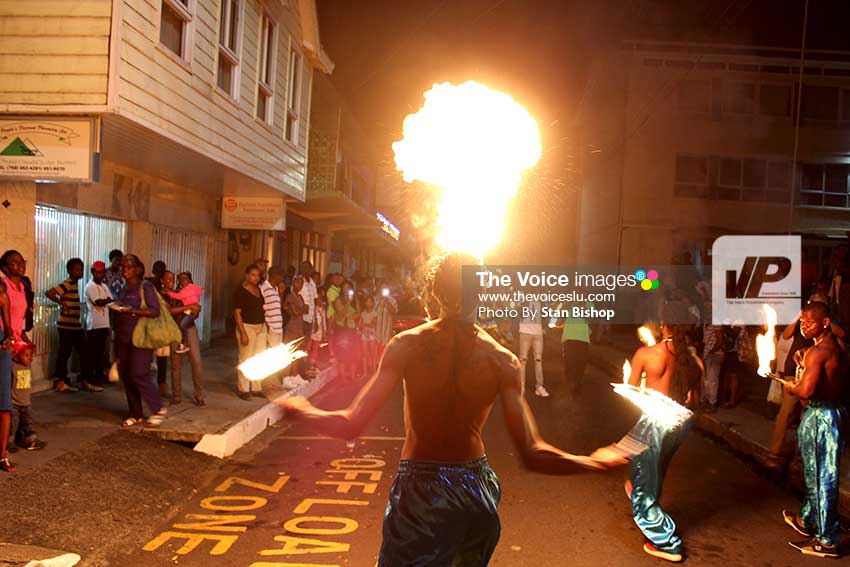 The cool Tuesday night made perfect the atmosphere for some fire, fun, festive greetings and fireworks as the Castries city circuit prepared to usher in National Day, which was observed on Wednesday.

Scores of masqueraders, fire eaters, stilt walkers, motorcyclists and participants in this year’s Lantern Festival joined with passersby in the street parade that began on Laborie Street (near Digicel), making their way along Jeremie Street onto Peynier Street and then Micoud Street.

Many onlookers captured the scenes on their cellphones as the procession made its way to Derek Walcott Square. For many who found the affair too tempting to just look at, joining in seemed the best and only option.

Prizes were also awarded to the winners in this year’s lantern festival, which proved to be as creative as previous years, especially with the infusion of topical themes, among them the St. Jude Hospital saga.

For nearly four hours, there was non-stop entertainment, much to the excitement of the many children present who certainly seemed to be enjoying their respite from the classrooms. The performance line-up was as long as the night and included Darleen Anius and Anwar Leonty, Royal St. Lucia Police Band, Kristian Lawrence, Ronald “Boo” Hinkson featuring Dennisha Marshall and Christa Bailey, Calabashers Choir, Silver Shadow Performing Arts Academy, Vladimir Lucien, Menell, Linda “Chocolate” Berthier and Oshun.

Among the other highlights on the night were the outer walls of Central library being transformed into a large screen, thanks to the guys from Fineline Graphics whose captivating sights and sounds video sequence was splashed onto the edifice.

And then came the moment when Acting Prime Minister Lenard “Spider” Montoute, Mayor Francis and 2017 Carnival Queen Chancy Fontenelle switched on the colourful decorative lights in Derek Walcott Square! To cap off the night, the night sky was filled with a splendid display of colourful fireworks as the crowd seemed enthralled in welcoming the beginning of the festive season.