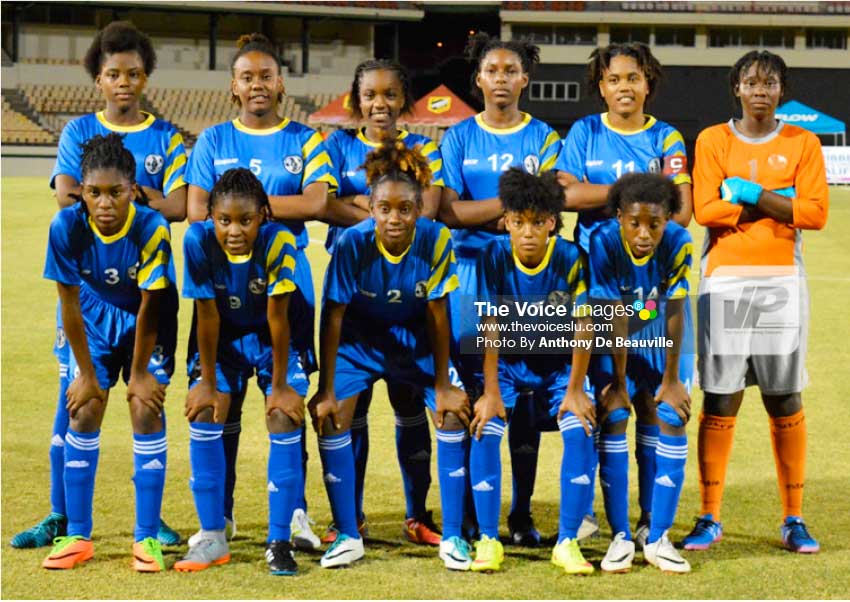 CONCACAF has designated today, Saturday, as CONCACAF Women’s Football Day and as a result, the Saint Lucia Football Association Inc. has developed a programme that will help celebrate and observe the day appropriately.

In his address, SLFA President, Lyndon Cooper, said, the beautiful game of football has over the past few years been through an immaculate evolution. The rules have been augmented, interest in the sport has grown exponentially and, most importantly, the barriers of racial and gender stratification have been dismantled to accommodate the absolute inclusion of everyone in the game. No longer are the intransigents adamant that football should be restrained to only those of masculine virility; but the world’s greatest game has now opened its arms to women.

The female game has been one of the greatest evolutions and achievements of football in Saint Lucia and the entire globe at large. There are now leagues organized exclusively for women around the world and even a female World Cup which has gathered great momentum and popularity in recent years.

FIFA, the world’s governing body of football, every year now recognizes the most adept female footballers on the same platform as they do with the male mega stars of the game. The popularity and general skill level of female football is ever increasing as the ladies’ game strives to rival that of the men.

For about fifteen years now, the Saint Lucia Football Association Inc. has established and sustained a female senior team. Though there have been inconsistencies with the ranking of our female teams, it must be acknowledged that at one point in our era, the Saint Lucian girls were considered the second best within the Caribbean Football Union; reaching as far up as one of the top 100 nations in the world for female football, according to FIFA’s rankings.

This accomplishment earned Team Saint Lucia the honour of being one of the most revered teams in the Caribbean. As an association, we have realized the relevance of maintaining such a stature and so through our four-year strategic plan (SP2020), we have carefully delineated our intentions for the sustenance of a viable development platform in female football. We have understood that the foundation of any structure or organization is the reflection of its actual strength. Hence, we have decided to fortify female football in Saint Lucia by reinforcing its foundation –the youth.

Female grassroots festivals are held throughout each league and also in the schools in an effort to recruit more participants in the game. Competitions are frequently held in schools and throughout the leagues to keep the girls engaged in the sport and in order to scout the best talent for the female national teams. Enormous emphasis has been placed on the proper institution of formidable female youth teams and the SLFA has invested heavily in ensuring their competence on the international arena and as such their participation at international competitions.

With the implementation of female football as a tier one component of the agenda of the SLFA’s SP2020, we try our best to cater for the holistic development of the girls through the game. In this regard, it must be noted that the SLFA understands and embraces the symbiosis which exists between football and education. As a result, we have aided in the sourcing and distribution of scholarship grants to four females who have displayed both academic aptitude and great football dexterity. This is a practice which the SLFA seeks to perpetuate to incentivise greater female participation in the sport.

Earlier this year, we hosted the CONCACAF Under-17 Women Football Championship. The competition was almost flawlessly executed and under the stewardship of Campbell and Coach Dennis Wallace as Team St. Lucia put on an excellent brand of football.

This, however, was not our first taste of female football success at the youth level. Last year, Saint Lucia reached the quarterfinal round of the CONCACAF Under-15 Female Championship out of twenty-four teams from around the world. This indeed was a fantastic achievement as the girls competed on a stage with CONCACAF juggernauts such as Mexico and the United States of America. Our mission is to build on these accomplishments and as our vision statement proclaims, we are aiming to propel female football to its highest heights.

In the coming year, we will recruit an Under-15 national team to represent us at the CONCACAF Under-15 Championship in August 2018. Also in 2018, the SLFA has planned a symposium geared at revising and modernizing the Women’s Football Strategic Plan. All this in an effort to boost female football in the nation.

In commemoration of the strides made by women in the sport nationally, regionally and internationally, CONCACAF has designated November 18 as Women’s Football Day. Annually, all member associations of the federation are encouraged to unite in the common endeavour to inspire girls and women to play football.

The SLFA, in recognition of that day, has planned numerous events commencing with a Women’s Football Conference with its three women’s national team players and ending with an exhibition of our female football product at the La Clery Playing Field. In keeping with CONCACAF’s theme for this year’s programme, I would like to pledge the SLFA’s undying support and dedication towards the sustained development of women’s football. In today’s football world, “Every Girl Can Play”, so let them play!