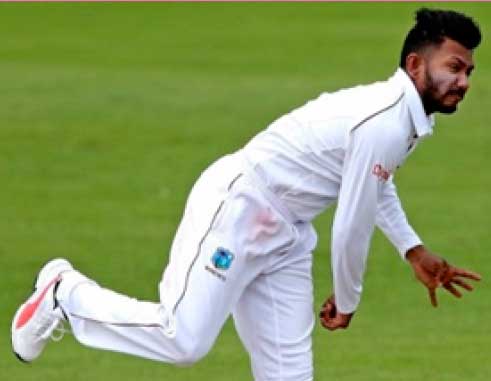 ZIMBABWE’S Regis Chakabva and captain Graeme Cremer put on an unbeaten eighth-wicket stand of 91 to secure a draw in the second and final Test against West Indies at the Queens Sports Club on Thursday.

The pair came together when Zimbabwe was teetering with a second innings lead of 88 and just three wickets remaining.

West Indies, however, were unable to break the stand as Chakabva finished not out on 71 and Cremer unbeaten on 28. Zimbabwe had reached 301 for seven when the match was declared a draw an hour after tea, having posted 326 all out in their first innings.

West Indies, who claimed the series 1-0 after winning the first Test by 117 runs, amassed 448 in their only turn to bat.

It is the first Test draw for Zimbabwe in 12 years and the first time they have avoided defeat in their last 10 matches.

“It felt good that our team batted when their backs were against the wall,” Cremer said at the post-match presentation. “There were a couple of missed opportunities, though. We dropped a few catches and the wicket wasn’t doing as much as we expected.”

Zimbabwe are next in action in the inaugural four-day Test against South Africa that starts on Boxing Day.

West Indies skipper Jason Holder said his side can gain momentum from the series ahead of their tour of New Zealand.

“I’m slightly disappointed at not being able to bowl them out in the second innings, but they batted well, too, and a few decisions didn’t go our way, but that’s how it goes,” Holder said. “I’m really pleased in our team’s direction. We’re off to train in Australia next before the New Zealand series. The conditions there will be quite like England, so it’s important to get acclimatised there and give it our best shot.”

Zimbabwe all-rounder Sikandar Raza was named man of the match for his scores of 80 and 89, and bowling figures of five for 99.

West Indies leg-spinner DevendraBishoo claimed man of the series after taking 13 wickets at an average of 26.15.